Owlpen Manor is a Tudor Grade I listed manor house of the Mander family, situated in the village of Owlpen in the Stroud district in Gloucestershire, England. There is an associated estate set in a valley within the Cotswold Area of Outstanding Natural Beauty. The manor house is about one mile east of Uley, and three miles east of Dursley.

Owlpen Manor invites superlatives. "Owlpen in its remote and beautiful valley near the Severn estuary is the epitome of romance", wrote David Verey in 1970. The poet Algernon Charles Swinburne already described it as "a paradise incomparable on earth" in a letter to William Morris in 1894.

It was designated by Historic England as a grade I listed building on 23 June 1952. The manor house is of medieval origins, incorporating fabric dated by dendrochronology to c. 1270. It was largely built and rebuilt in the Tudor period by the Daunt family between 1464 and 1616. Since then it has not seen significant development, except for some improvements early in the 18th century, when the east wing of the house, together with the gardens, church and Grist Mill, were reordered by Thomas Daunt IV between 1719 and 1726.

Owlpen (pronounced locally "Ole-pen") derives its name, it is thought, from the Saxon thegn, Olla, who first set up his pen, or enclosure, by the springs that rise under the foundations of the manor, about the 9th century.

There are records of the de Olepenne family (who may have named themselves after the place) settled at Owlpen by 1174. They were local landowners, benefactors to abbeys and hospitals, and henchmen to their feudal overlords, the Berkeleys of Berkeley Castle, whose wills and charters they regularly attest as their attorneys and witnesses. They held Owlpen of the Berkeleys as a sub-manor at half a knight's fee and for a rent of 5s. paid to Wotton manor.

In 1464 the male line failed after twelve generations of Olpennes and the manor and lands passed to the Daunt family on the marriage of Margery de Olepenne to John Daunt of Wotton-under-Edge. The Daunts were clothiers who had been settled in Wotton-under-Edge since the 14th century. They later acquired land as planters in Munster, Ireland, where by 1595 they had their principal estates at Gortigrenane Castle, near Carrigaline, and at Tracton Abbey, near Kinsale, both in County Cork. The Daunts altered the medieval manor house, inserting the ceiling in the great hall (dated 1523) and rebuilding the parlour/ solar block in the west wing (1616). This followed a celebrated law case between the Daunts and John Bridgeman, who had claimed possession in right of his wife, Frances Daunt, following the death of her brother Giles in 1596. He became embroiled in a dispute with her uncle Thomas Daunt over the manor of Owlpen, but lost the case when he was accused of forging deeds before Sir Edward Coke, the Attorney General. The manor was to continue in the Daunt family until the male line failed for a second time on the death of Thomas Daunt VI in 1803.

In the nineteenth century, the fortunes of the manor suffered after the Stoughton family, Anglo-Irish landowners from County Kerry, inherited by marriage in 1815. They built a new mansion c. 1848, called Owlpen House, a mile to the east of the original settlement, to the Italianate designs of Samuel Sanders Teulon. It was demolished in 1955–6, although outbuildings including the gas works, lodges and stable block remain. The Church of the Holy Cross behind the manor house, of medieval origins, was rebuilt in two phases in 1828 and 1874. 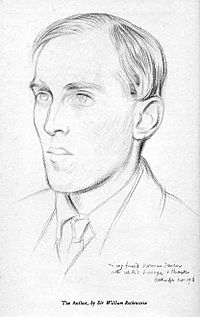 Towards the end of the 19th century, the old manor became an icon of the Arts and Crafts movement. It was described by early writers such as Henry Avray Tipping and the poet Algernon Charles Swinburne as an 'incomparable paradise', set in its remote valley as a Sleeping Beauty which had not been inhabited for nearly a hundred years, a picturesque ruin, much decayed and overrun with ivy, and dwarfed by enormous yew trees. After the First World War, there was concern for its survival and the Society for the Protection of Ancient Buildings recommended that it should be vested in the National Trust, which however had no funds available for its repair.

Finally, in 1924–25, the Owlpen estate was sold for the first time in nearly one thousand years. The future of the manor house was assured when it was acquired and repaired by Norman Jewson, a Cotswold Arts and Crafts movement architect who had worked with Ernest Gimson and the brothers Sidney and Ernest Barnsley (who was his father-in-law) in Sapperton. In 1930, his friend, the artist F. L. Griggs dedicated his etching of Owlpen Manor to Jewson, who had 'saved this ancient house from ruin'. Jewson has documented his repair work in his classic memoir, By Chance I did Rove (1951, twice reprinted).

Owlpen Manor is the Gloucestershire home of Sir Nicholas and Lady (Karin) Mander, and their family. Since 1974 they have repaired the manor house and outbuildings, with the cottages and estate. They have re-created the formal Stuart gardens and introduced family and associated Cotswold Arts and Crafts collections.

The manor contains a series of rare painted cloth wall-hangings dated about 1700, illustrating the life of Joseph, as well as several notable features, including Tudor wall paintings, panelling and plasterwork.

Nicholas Mander's father, the third Mander baronet of The Mount, died in 2006. The Mander family gave Wightwick Manor to the National Trust in 1937.

The manor house and gardens have been open to the public since 1966.

The formal terraced gardens with yew topiary are listed by Historic England Grade II. Sir Geoffrey Jellicoe, the landscape historian, stated they represented one of the earliest continuously cultivated domestic gardens in England, laid out within late medieval stone walls. They were probably reordered in their present form with their hanging terraces, defining topiary and yew parlour in early Stuart times, about 1620. They were admired as a romantic survival in the 20th century by many distinguished garden writers, including Gertrude Jekyll, who published drawings, plans and photographs in 1914, and Vita Sackville-West. They have been restored and extended with box parterres, extensive tree planting and a walk around the Georgian mill pond and pear lake, since 1980.

Nine historic cottages on the estate, including a Grist Mill (1728), Court House (1620s), Tithe Barn (1446), and weavers' cottages, have been available for holiday accommodation since the 1970s.

There is also a restaurant in the medieval cyder house, dated 1446.

Owlpen Manor has been the inspiration and title of a number of 20th-century poems, including verses by U. A. Fanthorpe, John Burnside and Reginald Arkell. The house is reputed to have inspired scenes in novels by John Buchan and Wolfgang Hildesheimer, and more recently in the romantic fictions of Kate Riordan, The Girl in Photograph (Penguin Books, 2015), and Dinah Jefferies, The Tea Planter's Wife (Penguin Books, 2015).

In recent years, Owlpen Manor has been used as the location for a number of TV feature films, game shows and documentaries. They include Most Haunted (Series 4, 2004); The Fly and the Eagle (a BBC drama about the romance of Bristol poet laureate Robert Southey and Caroline Anne Bowles); The Trouble with Home (a documentary about the Manders at Owlpen made for HTV West); What the Tudors did for us; Countryfile; The Other Boleyn Girl; Watercolour Challenge; as well as antiques, cookery, gardening, travel, and art programmes. The holiday cottages and restaurant featured on BBC1's Holiday programme, presented by John Cole and introduced by Jill Dando.

Owlpen Manor appeared as Bramscote Court in the BBC's period drama adaptation of Tess of the d'Urbervilles (2008), starring Gemma Arterton and Eddie Redmayne and (briefly) in Becoming Jane (2007), on the life of novelist Jane Austen. In 2017, the manor house and estate were used as one of the principal locations for the period drama film Phantom Thread starring Daniel Day-Lewis and directed by Paul Thomas Anderson.

There is a tradition that the manor house was visited by Queen Margaret of Anjou before the Battle of Tewkesbury in May 1471; since then her ghost has been said to haunt the great chamber where she slept. Apotropaic marks found in the house include witches' marks of incised overlapping circles in the form of 'daisy wheels', dating to about 1616, on the windowsill of an attic room and taper burn marks on the jambs of a medieval doorframe on the first floor; and concealed shoes were found by a fireplace in 1926.

All content from Kiddle encyclopedia articles (including the article images and facts) can be freely used under Attribution-ShareAlike license, unless stated otherwise. Cite this article:
Owlpen Manor Facts for Kids. Kiddle Encyclopedia.