Wotton-under-Edge /ˈwʊtən/ is a market town within the Stroud district of Gloucestershire, England. Located near the southern end of the Cotswolds, the Cotswold Way long-distance footpath passes through the town. Standing on the B4058 Wotton is about 5 miles (8.0 km) from the M5 motorway. The nearest railway station is Cam and Dursley, 7 miles (11 km) away by road, on the Bristol to Birmingham line.

The first record of the town is in an Anglo-Saxon Royal Charter of King Edmund I, who in AD 940 leased four hides of land in Wudetun to Eadric. The name Wudetun means the enclosure, homestead or village (tun) in or near the wood (wude). The "Edge" refers to the limestone escarpment of the Cotswold Edge which includes the hills of Wotton Hill and Tor Hill that flank the town. "The Edge" has also become a term used by locals to describe the area. In the 1086 Domesday Book listing, Wotton was in the hundred of Dudstone.

Kingswood Abbey was founded in 1139, but all that remains is a 16th-century Cistercian gatehouse. Nearby historical buildings include the Tudor houses of Newark Park and Owlpen Manor. The medieval former public house The Ancient Ram Inn dates back to 1145.

A battle occurred nearby, when the building was owned by a Viscount Lisle. William Berkely led the forces that beat the Viscount, and after the battle his men sacked the manor. This occurred on 20 March 1469.

St. Mary the Virgin was consecrated in 1283, and is the oldest and largest church in the town.

Overlooking the town on the top of Wotton Hill are a collection of trees planted in the 19th century to commemorate the Battle of Waterloo. These are situated on the site that housed one of the early warning beacons used to warn England of the approach of the Spanish Armada in 1588. 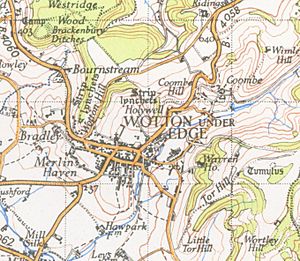 New Mills, founded in 1810, prospered by supplying both sides in the Napoleonic wars but after a century of decline the mill was near to closing in 1981 when it was acquired by Renishaw plc.

The town is relatively well served for a town of its size, the town contains a Kebab, Pizza, Chinese and British Takeaways as well as an Indian restaurant/take-away, there are also three public houses, the town can be quite lively at night compared to many others of its size.

In 1958, local people and school students built the town swimming pool, which was completed in 1961. Subsequently the pool has had solar and electric heating installed. In 1999 with the fund raising support of community groups, a retractable enclosure was fitted to prolong the swimming season.

In 2002, following the closure of the local cinema, a group of volunteers raised funds for a refurbishment to become one of the first digital cinemas in the UK. It re-opened in 2005 as a 100-seat facility inside an old stable yard, once part of the Crown Inn which closed in 1911. Films were first shown in the old Banqueting Hall of the Inn and moved to the stable yard some years later, due to the popularity of films. The Wotton Electric Picture House (the original name) is now a thriving venue

The town has always lacked a railway station. There was once one at nearby Charfield, which is still on a partly-extant line, and there have been calls for the station to be re-opened.

All content from Kiddle encyclopedia articles (including the article images and facts) can be freely used under Attribution-ShareAlike license, unless stated otherwise. Cite this article:
Wotton-under-Edge Facts for Kids. Kiddle Encyclopedia.