Dursley is a market town and civil parish in Gloucestershire, England. It is under the northeast flank of Stinchcombe Hill, and about 3¾ miles (6 km) southeast of the River Severn. The town is adjacent to Cam which, though a village, is a community in its own right. 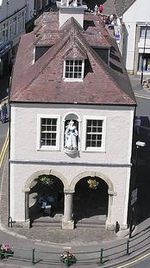 Dursley gained borough status in 1471 and lost it in 1886. From then until 1974 it was the administrative centre of Dursley Rural District (RDC). In 1974 the RDC became part of Stroud District.

The Parish Church of St. James the Great dates from the 13th century. The modern building is largely of 14th and 15th century construction and carries the Tudor coat of arms on the outside of the building below the guttering, indicating that some of its construction was funded by the Tudor royals. The original church spire collapsed in January 1699 during a bell-ringing session, causing casualties. The current bell tower, in an imposing Gothic survival style was built by Thomas Sumsion of Colerne in the years 1708–09.The pillared market house, complete with statue of Queen Anne and bell turret, dates from 1738, when the town's markets attracted farmers and traders from miles around. It is now maintained by the Dursley Town Trust who also look after Jacob's House and the Heritage Centre.

In the 19th and 20th centuries, Dursley was a large-scale manufacturing town, and engines built here by the Lister stationary engine company were used around the world. That company's successor, Lister-Petter, was based in the town until 2014, though much of the original 92-acre (37 ha) factory site was acquired in 2000 by the South West Regional Development Agency and then in 2011 by Stroud District Council. It is now being developed as a large housing development with some industrial units.

Church of St James the Great

Historically, other large factories based in the town included Mawdsley's, an electrical equipment manufacturer; Bymack's, an upholsterers; and the Bailey Newspaper Group, a newspaper printer, all of which have reduced or closed operations in recent years.

Ancient historical sites in the vicinity give evidence of earlier occupation. Uley Bury, in nearby Uley, is an Iron Age hill fort dating from around 300BC, and the area also has neolithic long barrows, (one of which, called "Hetty Pegler's Tump" can be entered) which are evident further afield at Selsley Common and Nympsfield to the north. Notable Roman remains exist at Frocester, West Hill near Uley, Woodchester and Calcot Manor.

The town sits on the edge of the Cotswolds escarpment where it drops off towards the Severn Vale and the River Severn. It is adjacent with Cam which, though a village, is a community of double the size. The two communities (combined population about 12,000) share many facilities.

Dursley's main watercourse is the River Ewelme which becomes the River Cam when it enters Cam. The town is surrounded by beautiful woodland and countryside and the Cotswold Way long distance trail passes through Dursley town centre.

In March 2010 Sainsbury's opened a newly built 20,000 sq ft supermarket within walking distance of the town centre. Other recent arrivals include Lidl (November 2009, in premises on Kingshill Road previously occupied by the Regal Cinema and then Kwik Save) and Iceland (July 2010, replacing Somerfield in the town centre). The Co-op has operated a smaller store in Rosebery Road since 2002. Although some people dismiss Dursley as the "supermarket and charity shop" district of Gloucestershire, the town centre also hosts a wide range of other shops including a traditional ironmonger's, a haberdashery, an old fashioned sweet shop, a florist, a butcher, a baker and a greengrocer. A quality camera shop is proving a great success in the town, and a vintage clothing shop opened in June 2014. There are a number of cafes.

A range of markets are held at the Market Place in the centre of the town; a farmers' market is held there on the second Saturday of every month and a craft market on the fourth Saturday of each month. There is an active Transition group in Cam and Dursley (part of the global Transition town network) which looks after Dursley's Secret Garden, among other projects. Continuing urban sprawl now joins Dursley and the nearby village of Cam.

Dursley has a number of licensed premises and the Old Spot pub is regularly voted Gloucestershire 'Pub of the Year'. The pub was also named as 2007 CAMRA National Pub of the year.

Around 1496, the famous Christian writer and martyr, William Tyndale was born near here, probably at Slimbridge.

All content from Kiddle encyclopedia articles (including the article images and facts) can be freely used under Attribution-ShareAlike license, unless stated otherwise. Cite this article:
Dursley Facts for Kids. Kiddle Encyclopedia.