Beverston Castle, also known as Beverstone Castle or Tetbury Castle, was constructed as a medieval stone fortress in the village of Beverston, Gloucestershire, England. The property is a mix of manor house, various small buildings, extensive gardens and the medieval ruins of the fortified building. The castle was founded in 1229 by Maurice de Gaunt.

Much of the castle remained in a state of ruin according to a 2019 report, and had been uninhabitable since the 17th century. Several buildings on the 693-acre property, including five cottages and the 17th century house with seven bedrooms, were in use as residences, however.

The original castle was laid out in pentagonal plan. In the early 14th century, a small quadrangular stronghold was added, along with a twin-towered gatehouse. Beverston Castle is situated approximately three kilometres west of the town of Tetbury and about two kilometres east of the medieval abbey annex, Calcot Manor. The castle is in the Cotswolds, a designated AONB (Area of Outstanding Natural Beauty).

Beverston Castle gatehouse viewed from the inside

Early Roman remains have been found nearby, at Calcot Manor, indicating habitation of this area as early as the 5th century, although it is likely that earlier Iron Age peoples would have also been in this locale. In the Middle Ages it was called Beverstane, and in medieval times the site was known as Beverstone. Another early name for this site was Bureston, derived from the large number of blue stones found here.

The site was the location of an important battle circa 1140 AD between the opposing English armies of King Stephen and Empress Matilda.

One source traced the history back to 1225 when Maurice de Gaunt built a fortified manor house without a royal licence, but was granted a licence to crenellate. On 29 July 1229, Henry III of England signed a document allowing the castle to stand and remain for ever. Maurice de Gaunt was also known as Maurice de Ghent or de Gant, and as Maurice Paynel; Beverston was called Beverestan in the July 1229 document which was written in Latin. A report from 1865 states that Maurice had inherited the property from his father Robert Fitzharding.

This early castle was fortified by a T-shaped ditch, part of which is still intact in the survival of a partial moat on the south side of the castle. In 1530, the castle was extensively remodeled Thomas, Lord Berkeley (1293–1361), who erected a small quadrangular stronghold, with a twin-towered gatehouse. A smaller square tower was added in the late 15th century. At an unspecified later date, the adjoining house was added, using parts of the original manor.

The woollen industry was central to the medieval economy of the Cotswolds, and in 1336, according to former R A Lister and Company employee A S Bullock, 5000 Cotswold sheep were shorn in the courtyard of Beverston Castle, which he thought might have been a record. The castle was remodelled in 1348–1349, the second phase of a renovation that began in the 1330s.

Lady Frances (born Poyntz) and Sir John Berkeley were living here in 1555 when their daughter Joanne Berkeley was born. Joanne would grow up to be Joanna the abbess of the Convent of the Assumption of Our Blessed Lady in Brussels.

At the end of the 16th century, Sir Michael Hicks (son of Robert Hicks, a merchant of London and Bristol, and Julia Arthur) bought Beverston Castle and passed the Beverston holding to his son Sir William Hicks, 1st Baronet. The estate remained in the Hicks family through to at least the early 19th century. As a result of the English Civil War (mid-seventeenth century), much of Beverston Castle was destroyed. Roundhead forces attacked the castle twice during the War, but the greatest damage was from an order from Parliament to slight its defensive works. The two major attacks occurred in 1644 and in 1691. The western and southern ranges along with the gatehouse with one of its original D-shaped towers have survived.

The property has had continuous occupation since a new residence building was built after the previous house was damaged in a major fire in 1691.

In 1842, the Hicks family sold Beverston Castle to R.S. Holford of Westonbirt. The property was purchased by the Hon Arthur and Mrs Strutt in 1939.

The massive extant west range of Beverston Castle is flanked on its angles with square towers, and it contains a solar above a vaulted undercroft. The pentagon-shaped masonry castle has two surviving, albeit ruined, round towers from the original 13th-century construction of de Gaunt. The dressed bluish limestone appears to be from the same quarry as the stonework of nearby Calcot Manor. The two-storey gatehouse, with one extant D-shaped tower, was added by Lord Berkeley in the 1350–1360 era. The gatehouse arch, totally intact as of 2006, would have originally been protected by an immense portcullis. Above the archway was a sizable first-floor (US = second floor) chamber. The ruined northwest square tower dates to the 14th century (Lord Berkeley's work), further modified in the late 15th century.

The southern domestic range, occupied as of 2006, was built by the Hicks family in the early 17th century, reflecting an age of growing security for large manor houses. This range was originally occupied by a medieval great hall from either the de Gaunt or Berkeley era. 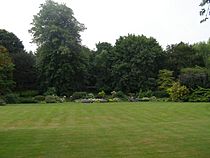 All content from Kiddle encyclopedia articles (including the article images and facts) can be freely used under Attribution-ShareAlike license, unless stated otherwise. Cite this article:
Beverston Castle Facts for Kids. Kiddle Encyclopedia.