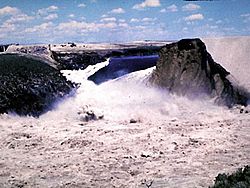 The Teton Dam collapsed during a flood on June 5, 1976

Teton Dam was a dam on the Teton River in Idaho, in the USA. When it was built, it was 3,100 feet (940 m) long and 305 feet (93 m) tall, making it one of the largest dams in the United States. It is most known for collapsing during spring runoff on June 5, 1976 a few months after it was completed. The resulting flood destroyed 10,000 acres of land and five cities.

The dam was never rebuilt. Although the U.S. Government paid $100 million to build the dam, it had to pay $300 million more dollars to pay for flood damages.

All content from Kiddle encyclopedia articles (including the article images and facts) can be freely used under Attribution-ShareAlike license, unless stated otherwise. Cite this article:
Teton Dam Facts for Kids. Kiddle Encyclopedia.