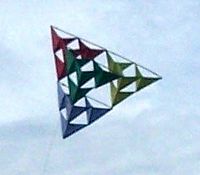 A tetrahedral kite being flown 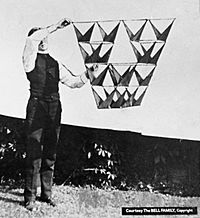 An early design of the tetrahedron kite from Alexander Graham Bell

This kite was invented by Alexander Graham Bell. It came about from his experiments with Hargrave's box kites and his attempts to build a kite that was scalable and big enough to carry both a man and a motor. As such, it was an early experiment on the road to manned flight. He worked on the kites between 1895 and 1910. Bell wrote about his discovery of this concept in the June 1903 issue of National Geographic magazine; the article was titled "Tetrahedral Principle in Kite Structure".

The tetrahedral kite is stable and easy to fly, but is not a light-wind kite. The large number of structural spars makes it relatively heavy and it requires moderate to strong winds.

All content from Kiddle encyclopedia articles (including the article images and facts) can be freely used under Attribution-ShareAlike license, unless stated otherwise. Cite this article:
Tetrahedral kite Facts for Kids. Kiddle Encyclopedia.