The Adventures of Grady Greenspace facts for kids 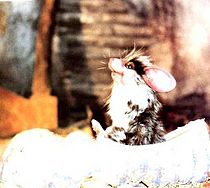 The Adventures of Grady Greenspace is a children's TV programme that was originally a French/Canadian programme called "Les Enquêtes de Chlorophylle" (roughly translated as "The Investigations of Chlorophylle"), which was co-produced by Damned Productions (Paris), la Société Française de Production, France 3, Productions Espace Vert (Montreal) and Logos Distribution [1] and aired between 1992 and 1993 [2].

The UK version was produced by Central Independent Television from 1994 to 1995.

The series was based on the character Chlorophylle created by Raymond Macherot and published by Dargaud[3] and was about a group of environmentally aware creatures and their adventures.

The shows characters were a combination of around twelve puppets and a large number of live animals.[4]

There were 52 episodes in total.[8] Known episodes:

All content from Kiddle encyclopedia articles (including the article images and facts) can be freely used under Attribution-ShareAlike license, unless stated otherwise. Cite this article:
The Adventures of Grady Greenspace Facts for Kids. Kiddle Encyclopedia.