The Boy in the Bubble (novel) facts for kids

Cover Image Of 'The Boy In The Bubble'

The Boy In The Bubble is a children's novel written by Ian Strachan and published in 1993. The novel follows the story of Adam, a child born with Severe combined immunodeficiency (SCID), and lived his life in an oxygen tent to prevent him from falling ill, and a schoolgirl named Anne who chooses to base her school project on Adam. The novel won the Red House Children's Book Award and was the 1994 Lancashire Book of the Year.

The story follows Anne, a girl who while coming home from school one day met Adam, who suffers from SCID. Due to his illness, Adam has no functional immune system, and must be shielded from the world in plastic oxygen tent lest he becomes deathly ill. Anne visits Adam frequently, and eventually the two grew to have a liking of each other.

The two form a romantic relationship together, however Adam worries that he is cheating Anne out of a more enjoyable relationship since he could not leave his oxygen tent to go out with Anne. He expresses this concern to Anne, who misunderstands and assumes Adam had lost interest in her, breaking up with him.

Anne forms a relationship with Tony to rebound from her breakup with Adam, but eventually realizes she misses Adam and goes to his house to apologize. However, when Anne arrives at Adam's house, his mother informs her that Adam is at the hospital undergoing a bone marrow transplant. The surgery is meant to transfer healthy bone marrow and stem cells to Adam so that he can build his immune system and go outside, though the operation does come at the risk of death. After the operation, Adam is able to live outside his sterilized bubble and embrace Anne and his family. Two weeks after Christmas, however, Adam dies.

SCID, abbreviated for Severe Combined Immunodeficiency and dubbed 'bubble boy disease' is a birth defect where the newborn lacks T- and B-lymphocyte systems. This lack of immune cells causes even common infections to be frequent, often times severe and deadly. Weakened strains of bacteria and viruses used in vaccines are also ineffective and dangerous to patients with SCID due to lack of immune cells to combat the pathogens.

The term 'bubble boy disease' is derived from the 1970's and 1980's when the story of David Vetter, a child with SCID, lived within a sterile containment for 12 years. 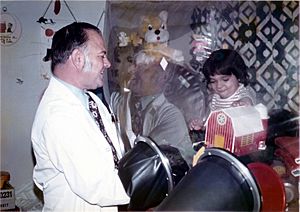 An example of the bubble an SCID patient would live in.

Today, SCID is curable upon early diagnosis. SCID could be cured through a stem cell transplant, otherwise known as a bone marrow transplant. Stem cells from a healthy individual could be used to morph into immune cells the patient lacks, and transfused into the patient's bloodstream so the patient develops an immune system. This treatment is most likely to be effective the earlier the disease is diagnose, thus immediate diagnosis is crucial to curing the child.

There is not much clear information on Ian Strachan's background. From what is known, Ian Strachan is a British novelist who writes young adult fiction. Strachan was born in 1939 and is still alive today. Strachan wrote multiple books on children struggling with disease and disability, and became a Nominee for the Angus Book Award, an award given by the Angus Council in Scotland, and won multiple prizes for his books.

All content from Kiddle encyclopedia articles (including the article images and facts) can be freely used under Attribution-ShareAlike license, unless stated otherwise. Cite this article:
The Boy in the Bubble (novel) Facts for Kids. Kiddle Encyclopedia.