The Crows of Pearblossom facts for kids 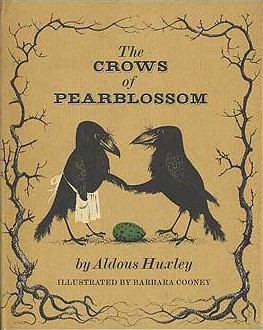 The Crows of Pearblossom is a 1944 short story written by Aldous Huxley, the English novelist, essayist and critic. In 1967 the story was published by Random House as a children's book illustrated by Barbara Cooney. A picture book version illustrated by Sophie Blackall was published in 2011 by Abrams Books for Young Readers.

This story, written Christmas of 1944, tells the story of Mr. and Mrs. Crow, who live in a cotton-wood tree at Pearblossom. Due to the Rattlesnake living at the bottom of the tree, Mrs. Crow's eggs are never able to hatch. After catching the snake eating her 297th egg that year (she does not work on Sundays), Mrs. Crow requests that Mr. Crow go into the hole and kill the snake. Thinking better of it, Mr. Crow confers with his wise friend, Mr. Owl. Mr. Owl bakes mud into two stone eggs and paints them to resemble Mrs. Crow's eggs. These dummy eggs are left in the nest to trick the Rattlesnake, who unknowingly eats them the next day. When the eggs get to his stomach, they cause the Rattlesnake such pain, that he thrashes about, tying himself in knots around the branches. Mrs. Crow goes on to hatch "four families of seventeen children each" and "uses the snake as a clothesline on which to hang the little crows' diapers."

All content from Kiddle encyclopedia articles (including the article images and facts) can be freely used under Attribution-ShareAlike license, unless stated otherwise. Cite this article:
The Crows of Pearblossom Facts for Kids. Kiddle Encyclopedia.