The Factory facts for kids 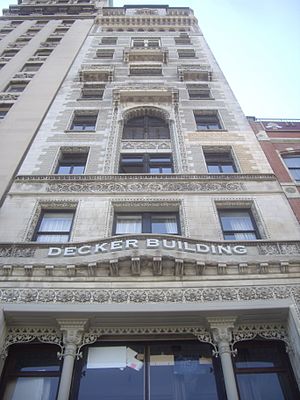 The Decker Building, the second location of the Factory

The Factory was Andy Warhol's New York City studio, which had three different locations between 1962 and 1984.

The original Factory was on the fifth floor at 231 East 47th Street, in Midtown Manhattan. The rent was one hundred dollars per year. Warhol left in 1967 when the building was scheduled to be torn down to make way for an apartment building.

He then relocated his studio to the sixth floor of the Decker Building at 33 Union Square West near the corner of East 16th Street, where he was shot in 1968 by Valerie Solanas.

The Factory was revamped and remained there until 1973. It moved to 860 Broadway at the north end of Union Square. Although this space was much larger, not much filmmaking took place there.

In 1984 Warhol moved his remaining business, no longer including filming, to 22 East 33rd Street, a conventional office building.

Many Warhol movies, including those made at the Factory, were first (or later) shown at the New Andy Warhol Garrick Theatre or 55th Street Playhouse.

All content from Kiddle encyclopedia articles (including the article images and facts) can be freely used under Attribution-ShareAlike license, unless stated otherwise. Cite this article:
The Factory Facts for Kids. Kiddle Encyclopedia.