The Garrick Cinema—periodically referred to as the New Andy Warhol Garrick Theatre, Andy Warhol's Garrick Cinema, Garrick Theatre, Nickelodeon—was a 199-seat movie house located in Greenwich Village at 152 Bleecker Street, Lower Manhattan, New York City. Andy Warhol debuted many of his notable films (including Bike Boy (1967), Blue Movie (1969), Flesh (1968), Lonesome Cowboys (1968), Loves of Ondine (1967) and others) in this building (as well as in other area theaters, including the 55th Street Playhouse) in the late 1960s. Frank Zappa and the Mothers of Invention played here nightly for 6 months in 1967.

The Cafe Au Go Go was located in the basement of the theater building in the late 1960s, and was a prominent Greenwich Village night club, featuring many well known musical groups, folksingers and comedy acts. 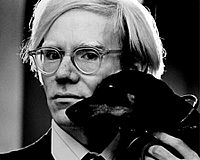 As an advertisement illustrator in the 1950s, Warhol used assistants to increase his productivity. Collaboration would remain a defining (and controversial) aspect of his working methods throughout his career; this was particularly true in the 1960s. One of the most important collaborators during this period was Gerard Malanga. Malanga assisted the artist with the production of silkscreens, films, sculpture, and other works at "The Factory", Warhol's aluminum foil-and-silver-paint-lined studio on 47th Street (later moved to Broadway). Other members of Warhol's Factory crowd included Freddie Herko, Ondine, Ronald Tavel, Mary Woronov, Billy Name, and Brigid Berlin (from whom he apparently got the idea to tape-record his phone conversations).

During the 1960s, Andy Warhol groomed a retinue of bohemian and counterculture eccentrics upon whom he bestowed the designation "Superstars", including Nico, Joe Dallesandro, Edie Sedgwick, Viva, Ultra Violet, Holly Woodlawn, Jackie Curtis, and Candy Darling. These people all participated in the Factory films, and some—like Berlin—remained friends with Warhol until his death. Important figures in the New York underground art/cinema world, such as poet John Giorno and film-maker Jack Smith, also appear in Warhol films (many premiering at the New Andy Warhol Garrick Theatre or the 55th Street Playhouse) of the 1960s, revealing Warhol's connections to a diverse range of artistic scenes during this time. Less well known was his support and collaboration with several teen-agers during this era, who would achieve prominence later in life including writer David Dalton, photographer Stephen Shore and artist Bibbe Hansen (mother of pop musician Beck).

The Cafe Au Go Go was a Greenwich Village night club located in the basement of the New Andy Warhol Garrick Theatre at 152 Bleecker Street. The club featured many well known musical groups, folksingers and comedy acts between the opening in February 1964 until closing in October 1969. The club was originally owned by Howard Solomon who sold it in June 1969 to Moses Baruch. Baruch closed the club in October 1969. Howard Solomon became the manager of singer Fred Neil.

The Garrick Cinema and related Cafe Au Go Go buildings were demolished in the 1970s, and the location, at 152 Bleecker Street, was used for a mid-rise apartment building with a Capital One Bank branch at ground level, which are the current buildings (as of September 2017), according to Google Maps.

All content from Kiddle encyclopedia articles (including the article images and facts) can be freely used under Attribution-ShareAlike license, unless stated otherwise. Cite this article:
Garrick Cinema Facts for Kids. Kiddle Encyclopedia.