The Great Lester facts for kids 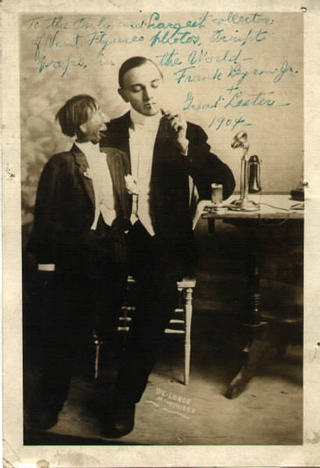 Called the "Grandfather of Modern-Day Ventriloquism", Lester claimed to be the first to drink while his dummy spoke; however, Joe Laurie notes that this trick was first performed in 1821.

One of Lester's most noted acts was a bit where he called up Heaven and Hell in search of his sister. He was also the first ventriloquist to walk among the audience while his dummy whistled.

Lester was also a noted teacher of the art of ventriloquism, having developed a rigorous program of breathing and speech articulation exercises. Students were encouraged to make tape recordings of their sessions with Lester and, as a result, there are many examples of his course to be heard and a number of student recordings have been made available commercially. Edgar Bergen, one of the most famous ventriloquists of all time, was one of the Great Lester's pupils.

All content from Kiddle encyclopedia articles (including the article images and facts) can be freely used under Attribution-ShareAlike license, unless stated otherwise. Cite this article:
The Great Lester Facts for Kids. Kiddle Encyclopedia.