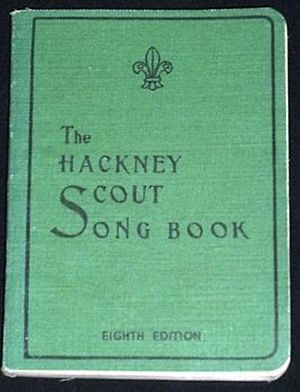 The Hackney Scout Song Book contains a collection of songs which were popular in the early days of the Scout Movement in the United Kingdom. Although originally intended for the use of Scouts in the Hackney district of East London, it quickly became the standard work of its type in the UK and around the world. First printed in December 1921, the last edition was published in 1972.

The book has its origin in a series of indoor "campfire" gatherings for Hackney Scouts organised by Stanly Ince, a local Scout [[Commissioner Originally intended only for Hackney Scouts, the first edition sold out within a few months. It remained in print for more than 50 years, sold over 130,000 copies and was translated into 27 languages.

All content from Kiddle encyclopedia articles (including the article images and facts) can be freely used under Attribution-ShareAlike license, unless stated otherwise. Cite this article:
The Hackney Scout Song Book Facts for Kids. Kiddle Encyclopedia.