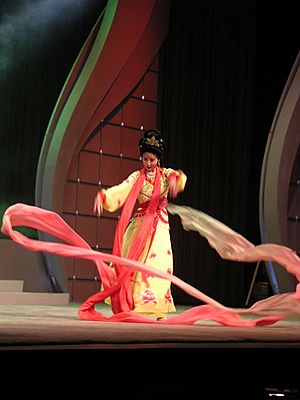 A Yue opera actress playing Sanshengmu, a major character, in 2006.

The Magic Lotus Lantern is a Chinese fairy tale from the Tang dynasty (618–907).

Sanshengmu was an immortal who had fallen in love with a mortal man. Her brother, Erlang Shen, was against it but she stole a magical lotus lantern and escaped the palace for earth. Sanshengmu eventually had a son named Chenxiang. After seven years Erlang Sheng was able to locate the couple by light of the magical lotus lantern. He captured Chenxiang so that Sanshengmu would return the lantern, and when she did she was imprisoned under a mountain. Chenxiang learns of how his mother was imprisoned and plans to get the lantern back to look for his mother. Chenxiang encounters many trials during his journey and in the time became a young man. He impressed the Monkey King so he made Chenxiang magical axe. Chenxiang fought Erlang Shen with the axe and just as Erlang Shen was ready to kill Chenxiang, the lotus lantern’s light penetrated Chenxiang’s body and merged with him so he was able to defeat Erlang Shen.

Chenxiang splits the mountain in half, Sanshengmu was rescued, and mother and son were reunited.

All content from Kiddle encyclopedia articles (including the article images and facts) can be freely used under Attribution-ShareAlike license, unless stated otherwise. Cite this article:
The Magic Lotus Lantern Facts for Kids. Kiddle Encyclopedia.