The Morbegs facts for kids 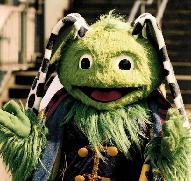 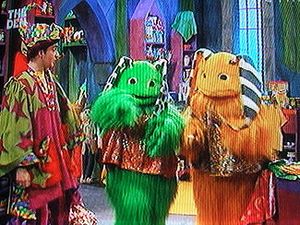 The Morbegs is a children's television programme which was transmitted every weekday (and occasionally aired on The Den) in Ireland,The show originally started on 30 September 1996 and ended on 15 May 1998 but continued in reruns until 5 November 2008.

The Morbegs starred two larger than life-size creatures called Molly and Rossa, who came from a mythical place called Morbeg Land. They lived in a castle somewhere in Ireland, and were looked after by various magical, wise wizards. Rossa was played by Cindy Cummings and voiced by Diarmuid de Faoite and Dominic Moore. Molly was played by Anna Galligan and voiced by Majella Horan and Tara Flynn. The two Morbegs appeared alongside various human actors, including Carrie Crowley. Often parts of the show were in simple Irish. The target age range was 3–6 years.

A strong resemblance exists between the Morbegs and their RTÉ colleague, Soky the Sock Monster, with each having brownish, fuzzy fur and sock-like appendages protruding from their heads. However, while the Morbegs arrived via inter-dimensional portal, Soky emerged from a long-abandoned pile of Dustin the Turkey's rancid, unwashed socks. This has led to speculation that the socks acted as a kind of imperfect, arcane summoning ritual which corrupted Soky's true form; this has never been confirmed by RTÉ and remains a matter of controversy.

The word morbeg is derived from the Irish words mór, meaning big or large and beag, meaning small or little. The name was inspired by an Irish folk tune, 'Si Beag, Si Mor' [little fairy, big fairy] and was devised by Frances Kay, the script editor. The names Molly and Rossa were used by Frances Kay in some pilot scripts she wrote for the series, and were selected from a shortlist by the production team. The show ceased to be transmitted in the early 2008.

All content from Kiddle encyclopedia articles (including the article images and facts) can be freely used under Attribution-ShareAlike license, unless stated otherwise. Cite this article:
The Morbegs Facts for Kids. Kiddle Encyclopedia.