The Pushcart War facts for kids 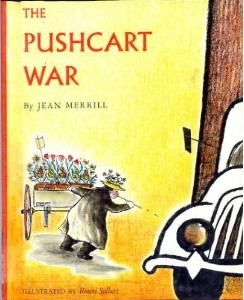 The Pushcart War is a popular children's novel by the American writer Jean Merrill, illustrated by Ronni Solbert and published by W. R. Scott in 1964. It is Merrill's best known work. The story is written in the style of a historical report from the future, looking back at the earlier events of a "war" on the streets of New York City between trucking companies and pushcart owners who use pea shooters as weapons to disrupt the trucks.

Merrill said the idea for the novel brewed in her for several years while she lived in Greenwich Village. She said the truck traffic there was oppressive and she fantasized about flattening the tires out with pea shooters. She had an epiphany and thought that "What you feel about the trucks is what everybody feels about bullies," and from there she began writing the novel. Merrill won a Fulbright Fellowship in 1965 for it. It won the Lewis Carroll Shelf Award (1964) and was a Horn Book Fanfare Best Book (1965).

The opening sentence says, "The Pushcart War started on the afternoon of March 15, 1976 when a truck ran down a pushcart belonging to a flower peddler." Later editions changed 1976 to 1986 then to 1998 so that the date would still be set in the future. Post-millennium editions of the book have been published with the date 2016. The newest is 2036

Traffic in New York City has become intolerable. Leaders of the three biggest trucking companies, known as The Three, hold a secret meeting where they plan to take over the streets for themselves by eliminating other traffic, starting with the pushcarts. The character Professor Cumberly says, "The truck drivers had gotten together and figured out that in crowded traffic conditions, the only way to get where you wanted was to be so big that you didn't have to get out of the way of anybody." This is known as the Large Object Theory of History.

Faced with truck-related "accidents", damaged carts, and injured fellows, the pushcart peddlers respond with the Pea-Shooter Campaign. Their aim is to flatten truck tires using pea shooters with pins in the peas so that everyone can see that the trucks are the cause of the traffic problems. One peddler, Frank the Flower, is arrested and falsely confesses that he shot all 18,991 of the truck tires. After his arrest, the peddlers give up the Pea-Shooter Campaign. But soon, inspired by Frank's arrest, children join in the sabotage of truck tires. The movie star Wenda Gambling also comes out in support of the peddlers.

On the truck team are the owners Moe Mammoth of Mammoth Moving, Walter Sweet of Tiger Trucking, and Louie Livergreen of LEMA (Lower Eastside Moving Association) (The Three). Their biggest trucks are respectively the Mighty Mammoth, the Ten-Ton Tiger and the Leaping Lema. Their most prominent driver is Albert P. Mack. A driver for Tiger Trucking is Joey Kafflis and he gets fired for saying that traffic is lousy and that he is standing up for the pushcarts instead of the trucks.

Initially, the outlook is bad for the peddlers because the trucking companies have the newspapers and Mayor Emmett P. Cudd on their side, but the citizens of New York City and the members of the press eventually move to the side of the street vendors after the peddlers' Peace March is interrupted by violence on the part of the truck drivers.

New laws are enacted to limit the size of the trucks to the current smallest size or smaller and to limit the number of trucks to one half of the current number. The Truce is passed to make it a criminal offense for a larger vehicle to take advantage of a smaller vehicle in any way. Albert P. Mack is sentenced to life in prison for violating the Truce nineteen times. The city erects a statue of General Anna to commemorate the struggle.

An excerpt from this book, titled "The Peashooter Campaign" is part of the textbook Galaxies (Houghton Mifflin Company: Boston, 1971, 1974)

In 1980, the novel was adapted for the stage by Gregory Falls for the Young ACT Company in Seattle. In 2006, a musical adaptation was presented by Edric Haleen in Holt, Michigan.

All content from Kiddle encyclopedia articles (including the article images and facts) can be freely used under Attribution-ShareAlike license, unless stated otherwise. Cite this article:
The Pushcart War Facts for Kids. Kiddle Encyclopedia.