The Sanctuary (Derby) facts for kids 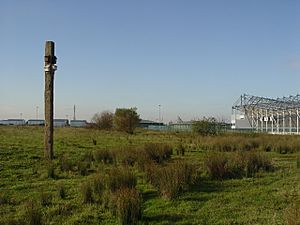 Open mosaic habitat at The Sanctuary Bird Reserve, Pride Park, Derby, prior to destruction for a cycle race track in 2014. Pride Park Football Stadium is in background.

The Sanctuary is a bird and wildlife sanctuary and designated local nature reserve (LNR) located on Pride Park in the city of Derby, England. It is on a twelve hectare site on the west bank of the River Derwent, adjacent to Pride Park Stadium and Derby Arena. Controversial plans by the local council owners to build a closed circuit cycle race track over part of the local nature reserve would have set a national precedent, potentially exposing all LNRs in England to harmful development., but were withdrawn in 2014 following widespread opposition and in the face of legal action and a judicial review of the planning decision.

Heavily contaminated from its former use as a gas works, the land had been designated a "Site of Interest for Nature Conservation" in the master plan by Derby City Council. Part of the site was used in 2003 to safely encapsulate contaminated material removed from other areas of Pride Park, but in 2001 the site was found to be home to ground nesting birds and passage migrants and a plan was created to protect their grassland habitat and to encourage their nesting by creating 'the city's first bird reserve'. 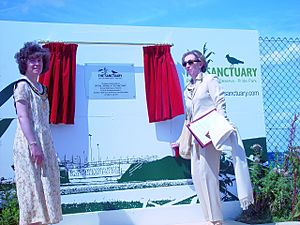 Margaret Beckett MP and the Mayor of Derby, Cllr Ruth Skelton, at launch of The Sanctuary Bird Reserve, Derby July 2004

The Sanctuary Bird and Wildlife Reserve was formally launched in July 2004 by the Secretary of State for the Environment, Margaret Beckett MP, alongside the Mayor of Derby. The site is now home to breeding skylarks, reed buntings and lapwings, all birds considered significant under the UK Biodiversity Action Plan, with additional habitat created for breeding sand martins and little ringed plovers.

The Sanctuary is not an open access area, but four viewing points are provided on the perimeter for the public. In 2005 The Sanctuary received both a Green Apple Award, and a Green Infrastructure Award from the East Midlands Regional Assembly. Facilities include ramped access for disabled people. In 2006 it was designated a Local Nature Reserve.

In February 2005 a Dartford warbler spent six weeks at The Sanctuary, attracting large numbers of bird watchers. It had not been seen in Derbyshire since a pair were shot at Melbourne Common in the winter of 1840.

All content from Kiddle encyclopedia articles (including the article images and facts) can be freely used under Attribution-ShareAlike license, unless stated otherwise. Cite this article:
The Sanctuary (Derby) Facts for Kids. Kiddle Encyclopedia.