The Sciences and The Arts Fountains facts for kids 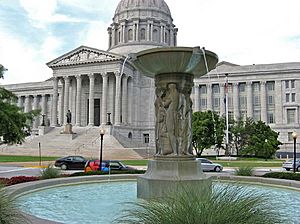 The Sciences and The Arts Fountains are a pair of Bedford limestone fountains, one on either side of the main entrance to the Missouri State Capitol in Jefferson City, created by Robert Ingersoll Aitken. Each fountain consists of two basins—the lower 35 feet (11 m) in diameter and the upper 11 feet (3.4 m) feet in diameter. The latter are supported by drums on which allegorical figures are carved in relief. The four figures on each fountain alternate between male and female.

All content from Kiddle encyclopedia articles (including the article images and facts) can be freely used under Attribution-ShareAlike license, unless stated otherwise. Cite this article:
The Sciences and The Arts Fountains Facts for Kids. Kiddle Encyclopedia.