The Screen On The Green facts for kids 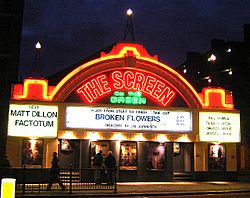 The Screen On The Green at night

The Screen On The Green is a single screen cinema facing Islington Green in the London Borough of Islington, London. The current building was opened in 1913 and it is one of the oldest continuously running cinemas in the UK. It is an example of the many purpose-built cinemas that followed the regulations set by the Cinematograph Act 1909.

It is distinctive in the local area due to its façade outlined in red neon, along with a large canopy used for advertising current and upcoming films and events.

Since 2008, the cinema has been operated by Everyman Cinemas Group, who have expanded their interests into a unique premium cinemas across London (including the original Everyman Cinema in Hampstead), Surrey and Hampshire.

Now retitled as 'Everyman Screen on the Green', the cinema offers a variety of films and special events, including the National Theatre Live, live Q&As, film festivals and seasons. The venue is equipped with Sony Digital 4K projectors and Dolby Digital surround sound.

Cinematic entertainment began at number 83 Upper Street, Islington when the Pesaresi brothers ran their original animated picture show in the then vacant shop. After success, and gaining financial assistance from Thomas Harrold who ran the "fancy drapery" store next door at number 82, they bought out Stean's Printers, Fosdykes' Confectionery and Vivian Lester's Sign Writers, numbers 84 to 86 respectively. They demolished the old shops and built a new purpose-built electric theatre designed by architects Boreham & Gladding, which opened in October 1913.

Renamed from The Empress Electric Theatre shortly after opening, the new cinema seated 600 on a single floor. It was originally considered very smart, though by the late 1930s it had become tatty and was compared unfavourably with the new picture palaces of the time. It was however cheap and remained very popular with local children.

The Empress was closed, refurbished and re-opened in December 1951 as The Rex. Its capacity was reduced slightly to 514 and a new single seat pricing policy was introduced, initially all seats being 1s 9d. The reopening ceremony included a fanfare of trumpets from the Islington Air Training Corps.

In the early sixties the cinema ran regular film shows for the local Turkish population. The films were specially flown over from Turkey and shown without subtitles. In the late sixties the local Greek community organised Greek language film shows which ran every Sunday. The Rex closed on 20 June 1970.

The cinema re-opened on 13 September 1970 as The Screen On The Green after being purchased by Romaine Hart's Mainline Pictures Group. It was comprehensively refurbished and modernised in February 1981 to plans by architect Fletcher Priest, one of the main modifications being the creation of foyer space, something the original building never had. This reduced the seating capacity to 300. It was operated as part of the small independent Screen Cinemas circuit until 2008, when the circuit was sold to the Everyman Media Group.

In December 2009 the cinema underwent its third major refurbishment, the main change being the addition of a full size bar within the auditorium space. The seating was also replaced, the new seats being flanked by plush two-seater sofas with footrests, sold at a premium. It has retained the charm of its original barrel vault ceiling, its iconic working red curtain, and the exterior, which is especially noticeable at night due to its neon outline and sign.

Aside from films, the cinema is probably most widely known for its 'Midnight Special' on Sunday 29 August 1976 when The Clash and Buzzcocks supported The Sex Pistols in a showcase event organised by Malcolm Maclaren. This was notable for many reasons including, it was only The Clash's third gig and the first ever to be recorded, and is the earliest known (after the Manchester Free Trade Hall concert from April 1976) recorded performance and a rare recording of The Sex Pistols with Glen Matlock. The Screen On The Green was also the location for the first performance of Sid Vicious with the Sex Pistols, on April 3, 1977, following the dismissal of Matlock from the band. The cinema is referenced throughout Adam and the Ants' song "Fall in" - released as the b side to "Ant Music" in 1980.

The Screen On The Green's 2009 refurbishment included the addition of a full-size stage in front of the screen, making the venue more suitable for live events. Since then the cinema has hosted comedy from Stewart Lee, Stephen K Amos and Phill Jupitus amongst others.

All content from Kiddle encyclopedia articles (including the article images and facts) can be freely used under Attribution-ShareAlike license, unless stated otherwise. Cite this article:
The Screen On The Green Facts for Kids. Kiddle Encyclopedia.