The Slave's Friend facts for kids 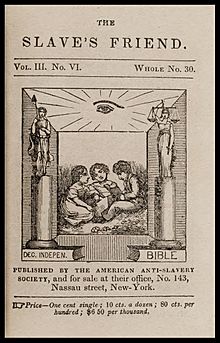 Cover of the 30th issue of The Slave's Friend (1837), including a graphic making appeals both to patriotism and religion.

The Slave's Friend (1836-1838) was an anti-slavery magazine for children produced by the American Anti-Slavery Society (AASS). The short-lived magazine was the first abolitionist magazine targeted to a juvenile audience in the United States.

All content from Kiddle encyclopedia articles (including the article images and facts) can be freely used under Attribution-ShareAlike license, unless stated otherwise. Cite this article:
The Slave's Friend Facts for Kids. Kiddle Encyclopedia.