The Story Museum facts for kids 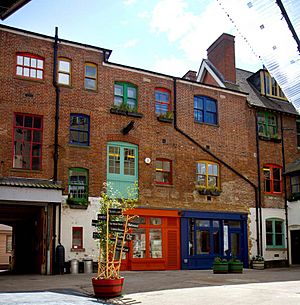 The Story Museum's Courtyard (south side). This section of the building was previously a telephone exchange and a pub, the steel hoist and first floor door are from occasions when telephony equipment was brought in.

The Story Museum is a museum in Oxford, England. It aims to encourage education and support community engagement by exploring all forms of stories. It is a registered charity under English law. As of 7 July 2018 the exhibitions of the museum were closed for renovation, although the cafe remained open. The museum was slated to reopen to the public on Saturday 4 April 2020, but the opening was delayed due to the COVID-19 pandemic. It partially reopened on 6th August, with visitors able to visit the cafe, shop and two of the new galleries. The full reopening was scheduled for 24 October 2020.

In 2012 The Museum worked with then-artist-in-residence Ted Dewan to build a "Storyloom", a large scale piece of kinetic art with an in-depth fictional history. The Storyloom went on to be featured in the 2012 Cultural Olympiad.

From 2016 until 2017, the Story Museum ran the exhibition 26 Characters featuring photography by Cambridge Jones, which was developed with the involvement of children's authors and illustrators, all of whom were asked to choose and then dress as their favourite childhood characters. The participants included:

From 2016 The Story Museum ran an exhibition called Animal, focusing on the role of animals as characters in texts including Watership down, Fantastic Mr Fox, Wallace and Gromit, Maus and the works of Aesop.

In 2017 The Story Museum ran an exhibition called Wild About Colour featuring a number of pieces by Brian Wildsmith alongside works by contemporary illustrators who had been influenced by his use of colour. The exhibition was curated by Helen Cooper and displayed the work of Shaun Tan and Korky Paul amongst others.

All content from Kiddle encyclopedia articles (including the article images and facts) can be freely used under Attribution-ShareAlike license, unless stated otherwise. Cite this article:
The Story Museum Facts for Kids. Kiddle Encyclopedia.