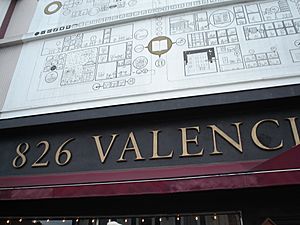 826 Valencia sign under a mural designed by cartoonist Chris Ware 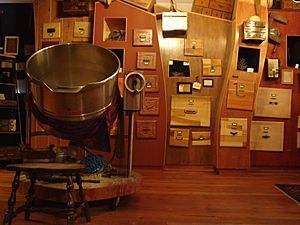 826 Valencia is a non-profit organization in the Mission District of San Francisco, California, United States, dedicated to helping children and young adults develop writing skills and to helping teachers inspire their students to write. It was the basis for the 826 National organization, which has centers on the United States with the same goal.

Named for its street address, 826 Valencia was founded in 2002 by author Dave Eggers and veteran teacher Nínive Calegari, who both have ties to the literary and educational community. 826 consists of three centers, each encompassing a writing lab, a street-front student-friendly store that partially funds the programs, and two satellite classrooms in nearby middle schools. The organization is named after the street address of the first center.

Over 1,400 volunteers—including published authors, magazine founders, SAT-course instructors, and documentary filmmakers—have donated their time to work with thousands of students. These volunteers allow 826 Valencia to offer all of its services for free.

826 Valencia opened a second location in the Tenderloin in 2016 and another in the Mission Bay neighborhood in 2019. 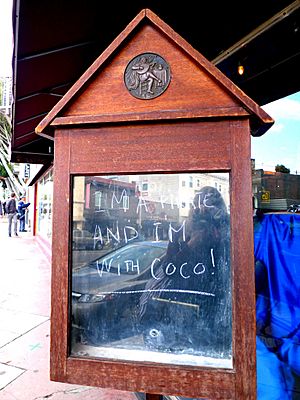 The storefront for 826 Valencia's pirate supply store with a sign reading "I'm a pirate and I'm with Coco!"

826 Valencia runs San Francisco's "only independent pirate supply store". The store is the front entrance of the tutoring center and has the look and feel of an authentic pirate shop. It sells pirate clothing, eyepatches, compasses, spyglasses, pirate dice, skull flags, and secret treasures. It features handmade signs, scattered around the store, offering tongue-in-cheek wisdom, such as "Uses for Lard" (#5: "Lard Fights") and "Guidelines for New Shipmates" (#4: "No forgetting to swab"). Unsuspecting visitors are sometimes treated to surprise "moppings."

Shoppers can also find back issues of McSweeney's Quarterly Concern, books published by McSweeney's, and literary compilations written by 826 Valencia students. The books of student writing published by 826 Valencia include forewords, illustrations and interviews from public figures such as Former San Francisco mayor Gavin Newsom and actor Robin Williams.

The Pirate Supply Store was originally created through necessity. After being turned down for regular use of church basements and school facilities, the founders discovered an empty store on Valencia Street. City ordinances required businesses in that area of the city to be either retail or catering, so the Pirate Supply Store was opened in 2002 as the "legitimate" business front for the writing center. It also helps fund the tutoring program.

Dave Eggers commissioned cartoonist Chris Ware to design the mural for the facade of 826 Valencia's building. The mural depicts "the parallel development of humans and their efforts at and motivations for communication, spoken and written." The 3.9m x 6m mural was applied by artisans to Ware's specifications. Describing the work, Ware said "I didn’t want it to make anyone 'feel good', especially in that typically muralistic 'hands across the water' sort of way,"..."I especially wanted it to be something that people living in the neighbourhood could look at day after day and hopefully not tire of too quickly. I really hoped whomever might happen to come across it would find something that showed a respect for their intelligence, and didn’t force-feed them any 'message'."

826 Valencia has inspired a number of other projects across the US, known as 'chapters'. In late 2004, just before the founding of four new chapters, 826 National was launched as an umbrella organization that provides logistical support to its chapters.

In April 2010, as an extension of the 826 Valencia scholarship program, Eggers launched ScholarMatch, a nonprofit organization that connects donors with students to make college more affordable.

All content from Kiddle encyclopedia articles (including the article images and facts) can be freely used under Attribution-ShareAlike license, unless stated otherwise. Cite this article:
826 Valencia Facts for Kids. Kiddle Encyclopedia.