The Tailor of Gloucester facts for kids

The Tailor of Gloucester is a children's book written and illustrated by Beatrix Potter, privately printed by the author in 1902, and published in a trade edition by Frederick Warne & Co. in October 1903. The story is about a tailor whose work on a waistcoat is finished by the grateful mice he rescues from his cat and was based on a real world incident involving a tailor and his assistants. For years, Potter declared that of all her books it was her personal favourite.

A tailor in Gloucester sends his cat Simpkin to buy food and a twist of cherry-coloured silk to complete a waistcoat commissioned by the mayor for his wedding on Christmas morning. Whilst Simpkin is gone, the tailor finds mice the cat has imprisoned under teacups. The mice are released and scamper away. When Simpkin returns and finds his mice gone, he hides the twist in anger.

In the summer of 1901, Potter was working on The Tale of Squirrel Nutkin, but took time to develop a tale about a poor tailor she heard in the Gloucestershire home of her cousin Caroline Hutton probably in 1897. The tale was finished by Christmas 1901, and given as a Christmas present to ten-year-old Freda Moore, the daughter of her former governess. 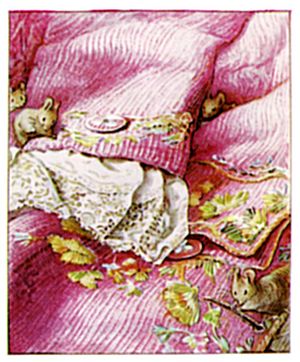 Potter visited a museum to refine her illustrations of eighteenth century dress.

The tale was based on a real world incident involving John Prichard (1877–1934), a Gloucester tailor commissioned to make a suit for the new mayor. He returned to his shop on a Monday morning to find the suit completed except for one buttonhole. A note attached read, "No more twist". His assistants had finished the coat in the night, but Prichard encouraged a fiction that fairies had done the work and the incident became a local legend. Although Prichard was a contemporary of Potter's (he was about eleven years her junior and in his twenties when the incident took place), Potter's tailor is shown as "a little old man in spectacles, with a pinched face, old crooked fingers," and the action of The Tailor of Gloucester takes place in the 18th century.

Potter sketched the Gloucester street where the tailor's shop stood as well as cottage interiors, crockery, and furniture. The son of Hutton's coachman posed as a model for the tailor. In Chelsea, Potter was allowed to sketch the interior of a tailor's shop to whose proprietor she would later send a copy. She visited the costume department at the South Kensington Museum to refine her illustrations of 18th century dress.

Potter later borrowed Freda Moore's gift copy, revised the work, and privately printed the tale in December 1902. She marketed the book among family and friends and sent a copy to her publisher who made numerous cuts in both text and illustrations for the trade edition, chiefly among the tale's many nursery rhymes.

In 1988, Rabbit Ears Productions produced a storyteller version with narration by Meryl Streep, drawings by David Jorgensen and music by The Chieftains.

Ian Holm played the tailor in a live-action TV adaptation in 1989 which included Thora Hird and Jude Law in an early part as the Mayor's stableboy.

In 1993, the tale was adapted to animation for the BBC anthology series, The World of Peter Rabbit and Friends. Derek Griffiths was the voice of Simpkin, with Ian Holm reprising his role as the tailor. The episode was dedicated to Dianne Jackson who died of cancer on New Year's Eve 1992.

All content from Kiddle encyclopedia articles (including the article images and facts) can be freely used under Attribution-ShareAlike license, unless stated otherwise. Cite this article:
The Tailor of Gloucester Facts for Kids. Kiddle Encyclopedia.