The Tale of Samuel Whiskers or The Roly-Poly Pudding is a children's book written and illustrated by Beatrix Potter and first published by Frederick Warne & Co. in October 1908 as The Roly-Poly Pudding. In 1926, it was re-published as The Tale of Samuel Whiskers. The book is dedicated to the author's fancy rat "Sammy" and tells of Tom Kitten's escape from two rats who plan to make him into a pudding. The tale was adapted to animation in 1993.

The theme of the tale is the childhood sin of disobedience. Tom Kitten is a young cat who lives with his mother, Mrs. Tabitha Twitchit, and sisters, Moppet and Mittens, in a house overrun with rats. Her children being an unruly bunch, Mrs. Twitchit puts Moppet and Mittens in a cupboard in order to keep them under control, but Tom Kitten, not wanting to be put in a cupboard, escapes up the chimney. As he makes his way to the top of the house, he comes across a crack in the wall and, squeezing through it, finds himself under the attic's floorboards. There he meets the rats, Mr. Samuel Whiskers and his wife Anna Maria. They catch him and proceed to cover him with butter and dough they have stolen in order to eat him as a pudding. They are seen by the two other Kittens who are hiding from their mother as they steal the dough, butter, and rolling-pin. However, when they proceed to settle the dough with a rolling-pin, the noise gets through the floorboards and attracts the attention of Tabitha Twitchit and her cousin Ribby who has been helping search for Tom. They quickly call for John Joiner, the carpenter, who saws open the floor and rescues Tom. He has the dough removed, is washed, and the remains of the dumpling are eaten by the family. Whiskers and his wife escape to the barn of Farmer Potatoes, spreading their chaos to another location, though leaving the cat family residence in peace. Potter mentions herself as seeing Samuel Whiskers and Anna Maria making their escape, using a wheelbarrow that looks like her own. Tom is so affected by the incident that while his sisters become fine rat-catchers he is afraid of anything larger than a mouse. 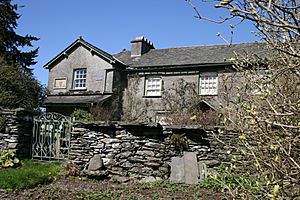 Hill Top Farm in Cumbria was the setting for Samuel Whiskers

The tale is the sequel Potter promised readers at the end of The Tale of Tom Kitten and is set in the interior of the house at Hill Top Farm. The storyline was inspired by an invasion of rats Potter experienced after purchasing the place.

The tale was published by Frederick Warne & Co. in October 1908 in a large 5 by 8 format (rather than the series usual 4 by 5) and dedicated to Potter's long deceased pet rat, "Sammy" or Mr. Samuel Whiskers. In 1926, the book was republished as The Tale of Mr. Samuel Whiskers in the small format of the series. 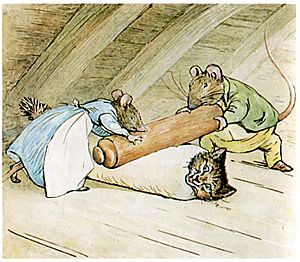 The book's large 5 by 8-inch format allowed Potter to include black and white line drawings and to lavish greater detail on the colour illustrations. The kitchen range, the staircase, the front door, the dresser and other details of Hill Top are all depicted in the illustrations. After purchasing Hill Top, Potter found less time and opportunity to work up illustrations and began to rely more and more on photographs to complete her work during the winter or while sojourning in London. Farmer Potatoes was Potter's real world neighbour Postlethwaite and the illustration was modelled on a photograph. The original sketch of Tabitha standing on the staircase searching for Tom has the head of the cat cut out and pasted in place. It is unknown if this was done because the original was wrong or that Potter was seeking a dimensional effect. Randolph Caldecott was an inspiration for Potter and his influence is evident in the depictions of Samuel Whiskers and Anna Maria who were modelled on the Rat and Miss Mousey in the illustrations for his "A Frog He Would A-Wooing Go". Potter's Jeremy Fisher was based on Caldecott's Frog. Some children wondered if Potter used a trussed-up kitten as a live model in her depiction of Tom Kitten waiting to be rolled into a pudding.

In 1933, Theron K. Butterworth published a dramatic adaptation of the tale as Mr. Samuel Whiskers. In 1993, an animated film adaptation was telecast on the BBC anthology series, The World of Peter Rabbit and Friends with the voices of Rosemary Leach as Tabitha Twitchet, John Gordon Sinclair as John Joiner, Patricia Routledge as Ribby, Struan Rodger as Samuel Whiskers, and Sheila Hancock as Anna Maria.

All content from Kiddle encyclopedia articles (including the article images and facts) can be freely used under Attribution-ShareAlike license, unless stated otherwise. Cite this article:
The Tale of Samuel Whiskers or The Roly-Poly Pudding Facts for Kids. Kiddle Encyclopedia.