The Story of Miss Moppet facts for kids

The Story of Miss Moppet is a tale about teasing, featuring a kitten and a mouse, that was written and illustrated by Beatrix Potter, and published by Frederick Warne & Co for the 1906 Christmas season. Potter was born in London in 1866, and between 1902 and 1905 published a series of small-format children's books with Warne. In 1906, she experimented with an atypical panorama design for Miss Moppet, which booksellers disliked; the story was reprinted in 1916 in small book format.

Miss Moppet, the story's eponymous main character, is a kitten teased by a mouse. While pursuing him she bumps her head on a cupboard. She then wraps a duster about her head, and sits before the fire "looking very ill". The curious mouse creeps closer, is captured, "and because the Mouse has teased Miss Moppet—Miss Moppet thinks she will tease the Mouse; which is not at all nice of Miss Moppet". She ties him up in the duster and tosses him about. However, the mouse makes his escape, and once safely out of reach, dances a jig atop the cupboard.

Although, critically, The Story of Miss Moppet is considered one of Potter's lesser efforts, for young children it is valued as an introduction to books in general, and to the world of Peter Rabbit. The character of Miss Moppet was released as a porcelain figurine in 1954 and a plush toy in 1973. The book has been published in a Braille version, translated into seven languages, and was released in an electronic format in 2005. First editions in the original format are available through antiquarian booksellers. 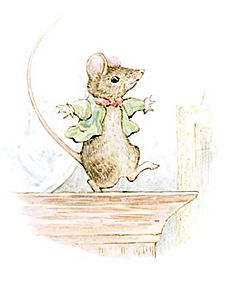 The last illustration shows the mouse dancing a jig.

Helen Beatrix Potter was born on July 28 1866 to barrister Rupert William Potter and his wife Helen (Leech) Potter in London. She was educated by governesses and tutors, and passed a quiet childhood reading, painting, drawing, tending a nursery menagerie of small animals, and visiting museums and art exhibitions. Her interests in the natural world and country life were nurtured with holidays in Scotland, the Lake District, and Camfield Place, the Hertfordshire home of her paternal grandparents.

Potter's adolescence was as quiet as her childhood. She matured into a spinsterish young woman whose parents groomed her to be a permanent resident and housekeeper in their home. She continued to paint and draw, and experienced her first professional artistic success in 1890 when she sold six illustrations of her pet rabbit to a greeting card publisher. She hoped to lead a useful life independent of her parents, and tentatively considered a career in mycology, but the all-male scientific community regarded her as nothing more than an amateur and she abandoned fungi.

In 1900, Potter revised a tale that she had written for a child in 1893, fashioning it into a dummy book similar to the size and style of Helen Bannerman's The Story of Little Black Sambo. Unable to find a buyer for her book, partially because the children's book market of the time depended on brightly coloured illustrations unlike Potter's line drawings, she decided to publish it privately in December 1901. Frederick Warne & Co had once rejected the tale but, to maintain its position in the small-format children's book market, reconsidered and accepted the "bunny book" (as the firm called it) following the recommendation of their prominent children's book artist L. Leslie Brooke. Potter agreed to colour her pen-and-ink illustrations according to Warne's requirements, and she suggested Warne use the new Hentschel three-colour printing technique in the printing process for The Tale of Peter Rabbit.

Potter continued to publish children's books with Warne, and by 1905 she found herself financially independent. Her books were selling well, and her income, combined with a small inheritance, allowed her to buy Hill Top, a farm of 34 acres (14 ha) at Near Sawrey in the Lake District in July of that year. When her longtime editor and fiancé Norman Warne died a few weeks after their secret engagement, she became depressed, but went on to devote herself to her stories. 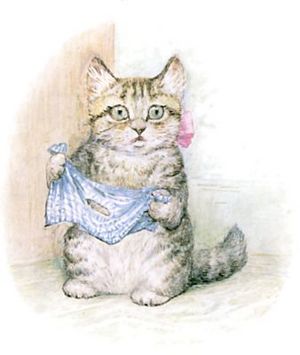 The tale opens with an illustration of a wide-eyed kitten: "This is a Pussy called Miss Moppet, she thinks she has heard a mouse!" The following illustration depicts a mouse wearing a pink bow tie and green jacket "peeping out behind the cupboard, and making fun of Miss Moppet. He is not afraid of a kitten." Miss Moppet darts at him, but misses and bumps her head on the cupboard. She hits the cupboard very hard and rubs her nose. The mouse scurries to the top of the cupboard and watches her.

Miss Moppet ties a duster about her head and sits before the fire on a red hassock. The mouse's curiosity is piqued; he thinks she looks very ill, and comes sliding down the bell-pull. "Miss Moppet looks worse and worse." The mouse creeps nearer. Miss Moppet holds her head in her paws and peeks at the mouse through a hole in the duster. "The Mouse comes very close." Miss Moppet jumps and snags him by the tail. 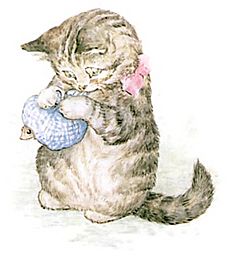 Beswick Pottery made a porcelain figurine of Miss Moppet tying the mouse in the duster.

Potter asserted her tales would one day be nursery classics, and part of the "longevity of her books comes from strategy", writes Potter biographer Ruth MacDonald. She was the first to exploit the commercial possibilities of her characters and tales; between 1903 and 1905 these included a Peter Rabbit stuffed toy, an unpublished board game, and nursery wallpaper. Similar "side-shows" (as she termed the ancillary merchandise) were produced throughout her life. For a number of years Potter designed Christmas cards with characters from her books that were sold to raise money for charities.

Potter died on December 22, 1943, and left her home and the original illustrations for almost all of her books, including Miss Moppet, to the National Trust. Hilltop was opened to visitors in 1946, and displayed her original artwork there until 1985. After Potter's death, Frederick Warne & Co granted licences to various firms for the production of merchandise based on her characters. Beswick Pottery of Longton, Staffordshire released a porcelain figurine of Miss Moppet in 1954; the firm was eventually acquired by Royal Doulton which continued to issue the figurine under the "Royal Albert" brand until it was discontinued in 2002. From 1980 to 1995 when it went out of business, Schmid & Co. of Toronto and Randolph, Massachusetts produced a Miss Moppet music box figurine. From 1983 to 1991, Schmid distributed two Miss Moppet Christmas ornaments (3 and 1.5 inches (76 and 38 mm) tall), made by the Italian firm ANRI. Stuffed toy manufacturers requested licensing for Potter's figures early in the 20th century; however she refused to grant permission, having been disappointed with the quality of the proposed stuffed toys. Frederick Warne & Co retained rights to all Potter merchandise and in 1973 granted a licence to the Eden Toys company of Jersey City, New Jersey to manufacture stuffed animals based on Potter's characters. Beginning in 1975 these included a plush Miss Moppet, which was discontinued in 2001 when Eden Toys went out of business. 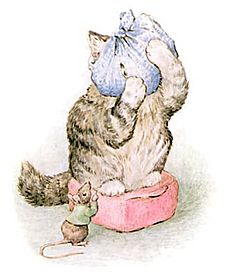 The 1918 hardcover edition cover had an onlay of this image of Miss Moppet peeking through a hole in the duster.

As of 2010, all 23 of Potter's small-format books, including Miss Moppet, remain in print, and are available as a complete set in a presentation box. A 400-page omnibus edition is also available, as is an electronic format, released in 2005. First edition and early edition Potter books are offered by antiquarian booksellers.

Although sold to Penguin Books in 1984, Frederick Warne & Co remained a subsidiary company and continues to publish Potter's books. A 2002 Publishers Weekly article, written for the centennial of the publication of The Tale of Peter Rabbit, reported that Potter was considered one of the most popular classic writers, that anniversary editions of her work were published in 1993 and 2002, and the artwork has been "re-scanned to make the illustrations look fresher and brighter". The Frederick Warne name still appears on editions of Potter's books in English.

Languages into which Miss Moppet has been translated include Chinese, French, German, Italian, Japanese, Spanish and Vietnamese; a Braille edition in English has also been prepared. Miss Moppet was parodied by Nicholas Garland in a political cartoon in the 11 June 1976 issue of the New Statesman. Margaret Thatcher had lost a motion of no confidence in the government of Prime Minister James Callaghan, and Garland's cartoon copied the text and parodied four panels of the story, with Callaghan as the mouse who escapes Thatcher the kitten. In 1986, MacDonald observed that Potter's books had become a "traditional part of childhood in most only English-speaking countries and in many of the countries into whose languages Potter's books have been translated".

All content from Kiddle encyclopedia articles (including the article images and facts) can be freely used under Attribution-ShareAlike license, unless stated otherwise. Cite this article:
The Story of Miss Moppet Facts for Kids. Kiddle Encyclopedia.