The URL with Phred Show facts for kids

The URL with Phred Show is an American television series, produced by Nickelodeon for its sister channel Noggin. It is a spin-off series to Phred on Your Head Show, an earlier Noggin series with the same animated host: a small, green character named Phred. Premieres of The URL with Phred Show aired from September 10, 2001 until 2002, and reruns aired until 2004. The show is presented as an art showcase, and each episode follows Phred as he presents a mix of viewer-submitted artwork and messages from Noggin's website.

The show was named after URL, a term for an online web address. In the episodes, the URL name is said to also stand for "U R Live," emphasizing how viewers could submit their own art and messages to Noggin's website to see them live on the show. In a departure from the original Phred on Your Head Show, the spin-off is themed around a website interface, and there are a variety of new characters who co-host the show with Phred. Most of the new characters started out in Noggin's online games before appearing on the show. 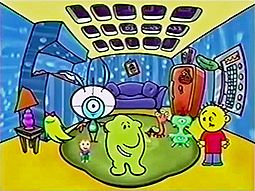 Phred and his friends from Noggin.com

All content from Kiddle encyclopedia articles (including the article images and facts) can be freely used under Attribution-ShareAlike license, unless stated otherwise. Cite this article:
The URL with Phred Show Facts for Kids. Kiddle Encyclopedia.