Phred on Your Head Show facts for kids

Phred on Your Head Show is an American children's television series produced by Nickelodeon for its sister channel Noggin. The first episode aired on Nickelodeon as a sneak peek on June 6, 1999. Noggin aired encore showings of the first episode throughout June and started airing the show regularly on July 26, 1999. The show stars a small green character named Phred, voiced by Doug Preis, who has his own variety show. In each episode, Phred hops across different people's heads to find a host, who then chooses a selection of Noggin programs to play.

Phred was animated by two studios: MTV Animation and Possible Worlds. The show was linked with Noggin's website, Noggin.com, and Phred's home was said to be inside the "dot" of Noggin.com. The episodes encouraged viewers to visit Noggin.com and send in their own ideas, comments, and questions for future episodes. These were integrated into the show as part of a segment called "Phred's Got Mail." Other segments called "We Show It" and "Out of Your Mind" featured short films that were created by Noggin viewers.

Phred on Your Head Show debuted to successful ratings, posting a 2.2 Nielsen score in 1999. Multichannel News reported that the show drew record traffic to Noggin's website. The show ran for two seasons and aired its last new episode on September 9, 2001, with a spin-off series called The URL with Phred Show later premiering in its place. The spin-off was formatted as an online art showcase hosted by Phred, and it had more emphasis on viewers' submissions to Noggin.com. Both shows aired in reruns until March 31, 2002. 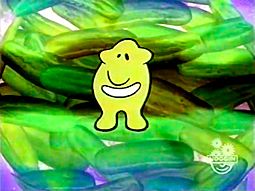 Phred during the "Pickles to Pluto" game

The show opens with a prologue explaining Phred's backstory. He was a mascot for a pickle company called Phantastic Pickles and lived on a pickle jar. One day, Phred's pickle jar rolled off of a supermarket shelf and set him free. He was curious about the outside world and looked for a good place to think, which led him to the dot of Noggin.com. There, he became Noggin's spokesperson and went from "pickle jar to TV star."

The rest of the show centers on Phred presenting his own variety show from the head of a child. An unseen character named Big Voice gives Phred the name of the upcoming episode's host. Phred hops from head to head of different people, and when he finds the host, a stop-motion theme song plays. It has replaceable lyrics that change to fit in the host's name. Once the host has been introduced, Phred tells the Noggin crew to "pickle" the host. This teleports the host and Phred into Noggin.com, where they choose different Noggin programs to show.

The show's first-ever episode was an hour-long episode hosted by a boy named Chad. Hour-long episodes hosted by Mary and Anthony existed as well, and these same episodes were also trimmed down and aired as half-hour episodes.

The URL with Phred Show

A spin-off based on Phred on Your Head Show premiered in 2001, called The URL with Phred Show. It focuses on user-generated content submitted to Noggin.com.

All content from Kiddle encyclopedia articles (including the article images and facts) can be freely used under Attribution-ShareAlike license, unless stated otherwise. Cite this article:
Phred on Your Head Show Facts for Kids. Kiddle Encyclopedia.