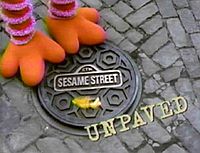 Sesame Street Unpaved features select episodes from the series' first twenty seasons. The 67-episode package includes every season premiere of Sesame Street with the exception of the season sixteen premiere. Each installment consists of a remastered version of an older episode, normally trimmed and edited to allow time for commercials. Episodes open with an exclusive title sequence created specifically for Unpaved, which depicts the characters on a busy New York street and was shot on-location in the borough of Queens. The package was partially marketed towards older viewers who would watch the program based on nostalgia.

The first installment of Unpaved was produced in promotion of Sesame Street's thirtieth year on television. Unlike all other installments, it was created in a clip show format; scenes from a variety of hallmark episodes were featured instead of content from a single episode, and original footage starring five of the program's original cast members – Loretta Long, Sonia Manzano, Bob McGrath, Martin P. Robinson, and Caroll Spinney – was added as a framing device. These segments were written and produced by Josh Selig. Robinson (Mr. Snuffleupagus and Slimey the Worm) and Spinney (Big Bird and Oscar) were the only Muppet performers who appeared as themselves.

123 Sesame Street repackages episodes from the seasons 25, 30 and 31. Its title is derived from the fictional address of the franchise's titular location. Unlike Unpaved, this package was explicitly aimed at preschoolers. It was used as a way to introduce a new generation of viewers to older episodes that still managed to meet modern educational standards. Many installments of this package were incorporated into marathons and events consisting of otherwise brand-new content.

123 Sesame Street also debuted in 1999. Unlike Unpaved, it was never shown on TV Land and regularly broadcast twice a day on Noggin. When the Noggin channel was restructured in spring 2002, and many CTW programs were dropped from its regular schedule, 123 Sesame Street replaced all other airings of Sesame Street content (with the exception of Play with Me Sesame). The package continued to air until September 2005, about three years after Unpaved was removed.

All content from Kiddle encyclopedia articles (including the article images and facts) can be freely used under Attribution-ShareAlike license, unless stated otherwise. Cite this article:
Sesame Street syndication packages Facts for Kids. Kiddle Encyclopedia.