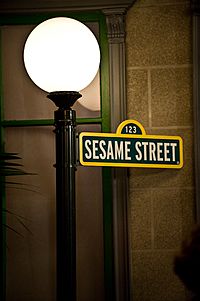 Signpost of the Sesame Street.

Sesame Street is a fictional street located in Manhattan (a borough in New York City). The street serves as the location for the American children's television series of the same name, which is centered around 123 Sesame Street, a fictional brownstone building.

The fictional Sesame Street is set to represent a neighborhood of New York City. The specific neighborhood that it is supposed to represent is disagreed upon. Art director Victor DiNapoli has stated that it is supposed to be located on the Upper West Side. Sesame Street's co-creator, Joan Ganz Cooney, stated in 1994 that she originally wanted to call the show 123 Avenue B, after the Alphabet City area of the Lower East Side and East Village.

The building was meant to appear typical of New York neighborhood brownstones, being described as a "survivor of gentrification" by art director Victor DiNapoli.

Oscar the Grouch’s Trash Can

Oscar the Grouch’s Trash Can sits in front of a fence made of salvaged doors and is where Oscar the Grouch lives. Oscar the Grouch's Trash Can is deeper than anyone suspects. In the first episode, Gordon mentioned that the Trash Can had three and a half bedrooms. The seemingly bottomless domain houses a variety of diverse Grouch amenities and luxuries. Oscar's girlfriend Grundgetta is his most recurring visitor to his Trash Can. In "Sesame Street Visits the Firehouse", Gordon mentioned that in Oscar’s Trash Can lived, "Two elephants, a puppy, a rhino, a goat, and a worm." The first time when the interior of Oscar's Trash Can was explored as a setting was in the 1999 film The Adventures of Elmo in Grouchland, when Elmo impatiently enters the Trash Can in search of his blanket. In Season 46, as part of the set redesign, the Trash Can was moved to the other end of the front of 123 Sesame Street. It is now part of a recycling center with a Compost bin and. Oscar has the ability to pop up in different locations all over the street.

Behind the doors is Big Bird’s Nest, where Big Bird lives. One of the windows of Gordon and Susan's apartment overlooks the nest. Big Bird’s Nest was later redesigned following a hurricane that hit Sesame Street. Big Bird's best friend Mr. Snuffleupagus is the most frequent visitor to his nest. The construction doors were removed in Season 46 and the nest now rests in a tree, out in the open.

To the left of 123 is a forecourt that serves as the entrance to a carriage house. The forecourt called the Arbor serves as a playground, and separates 123 from a tenement. The set continues to the left of the Arbor as the street turns to the left. In the first season, the Arbor was a tiny location between the two buildings, as there was no curve in the street. In the late 1990s, the characters decided that the neighborhood needed more green space and built a community garden in a vacant lot behind the Arbor. The garden behind the Arbor is where Stinky the Stinkweed resides.

At one time, the carriage house that serves as its backdrop housed a garage. Susan kept her Volkswagen there while at other points Oscar (who has also been shown as the owner of the garage) has kept his Sloppy Jalopy there and Hiroshi used the space as his art studio. For a while, it was the location of Gina's veterinary practice, and later Charlie's Auto Repair garage. During the Season 46 set redesign, it was converted to a community center with the community garden being extended behind 123, connecting onto Big Bird’s nest area while becoming Abby Cadabby’s home.

Hooper's Store is located immediately after the bend in the road. It serves as a lunch counter and general store. Above the building were the apartments of Bob, David and now, Charlie.

In 1989, David moved away to live with his grandmother and left the store in the hands of a retired firefighter named Mr. Handford. The store’s current proprietor is Alan who bought the store from Mr. Handford in 1998.

The Sesame Street Library is a common point of interest on Sesame Street. A Lending Library was located next to Hooper's Store in the spot that has since housed the Fix-It Shop, the Mail-It Shop, and the Laundromat and before that a pet shop. Maria worked there while Grover would occasionally help out. All the residents of Sesame Street would come to borrow books. Linda worked as a librarian for several years in a different library that has at different times been located across the street from 123 and in another part of New York City. The library was later seen located next to the Subway Station where the bike shop is now (in a 2007 episode) and a pop-up library in the arbor featured in an episode that aired in 2019.

The Fix-It Shop opened in Season 3 as the L & R Fix-It Shop run by Luis and Rafael. Rafael departed at the end of the season and Luis ran the business by himself until he hired Maria in 1976. Maria was later promoted to full-time partner in 1981 and in 1988 the two got married. The street’s residents would bring their Brocken items to be fixed, toasters were the shop’s specialty.

The Laundromat is the current business operating next to Hooper's Store after the Fix-It Shop was removed in 2008. This is where the residents of Sesame Street do their laundry. The Laundromat was originally run by Leela and has since been seen in the care of Nina and Grover among others.

Previously, in The Adventures of Elmo in Grouchland, a Laundromat was seen across from 123 Sesame Street (which has also been seen as a library and a thrift shop). There also used to be a laundry room in the basement of 123 that was available for use by the residents of the street.

In Season 45, a Bicycle Shop appeared in the vacant storefront near the Subway Station that was briefly used for a flower shop. It was opened by Luis who sold bicycles and also repaired them and sold other bike-related items. It was opened as a result of the closure of the Fix-It while Maria became the superintendent of 123. It is now run by Nina who started working there part time in Season 46 and took over management the following season. As part of the rare views of the other side of Sesame Street, the Bicycle Shop is next to a CGI depiction of Manhattan where it shows a playground and the Triborough Bridge among the cityscape.

In Season 46, a newsstand was added in between the Subway Station and what is currently the Laundromat. It is run by The Two Headed Monster. There previously was a newsstand Around the Corner run by Oscar in between the Subway Station and the park that sold Grouch newspapers, newspapers and magazines with dirt or fish inside and out of date newspapers. Hoopers Store has also functioned as a Newsstand with one lying in front of the building.

Other locations in the neighborhood

Other locations on Sesame Street include the following:

Sonia Manzano quoted that "By expanding the street and going around the corner, we will have other places to hang out beyond the stoop of 123 Sesame Street, and we will be able to explore family issues which we think are so important to kids today."

The Around the Corner parts were dropped by Season 29 (though it did appear in The Adventures of Elmo in Grouchland). Caroll Spinney and Martin P. Robinson commented that the kids had a hard time keeping up with all the new characters.

Among the known locations of Around the Corner include:

All content from Kiddle encyclopedia articles (including the article images and facts) can be freely used under Attribution-ShareAlike license, unless stated otherwise. Cite this article:
Sesame Street (fictional location) Facts for Kids. Kiddle Encyclopedia.