Sesame Street is a children's television series with human actors and puppets that are called Muppets. The show deals with issues such as music, song, alphabet, numbers, and teaching children basics in learning. Part of the profits, go to an international project for children's schools.

The show has been on TV since November 10, 1969. Jim Henson made the Muppets, and a lot of writers and puppeteers worked together to make the show. The Muppets were used afterwards in a different show called The Muppet Show. Sesame Street has been on TV in 120 countries all over the world. More than 4000 episodes have been made over 40 seasons.

In 2015, new episodes started airing on the HBO channel. 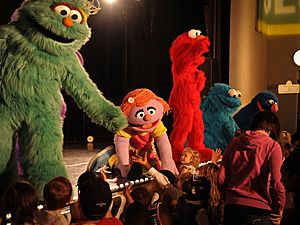 There are three new muppets for Sesame Street. One is a girl fairy named Abby Cadabby. Another is Murray, and his lamb named Ovajita. Not only Muppets play in the show but also human actors who live with the Muppets.

All content from Kiddle encyclopedia articles (including the article images and facts) can be freely used under Attribution-ShareAlike license, unless stated otherwise. Cite this article:
Sesame Street Facts for Kids. Kiddle Encyclopedia.