The Upside Down Show facts for kids

The Upside Down Show is a children's television series produced by Sesame Workshop, Noggin LLC, and Nickelodeon. It was made for Nickelodeon's sister channel Noggin, which launched as a joint venture between Nickelodeon and Sesame Workshop. The series is set in a strange apartment building where the doors and windows lead to a variety of unusual rooms. It is presented by brothers Shane and David (played by the Umbilical Brothers), who live in the apartment building with their sidekick Puppet, their neighbor Mrs. Foil, and a group of fuzzy creatures called the Schmuzzies. In each episode, David gives the viewers an imaginary remote control that affects the characters and their surroundings.

The series was inspired by the Umbilical Brothers' adult-oriented comedy act SpeedMouse, which was also based on the idea of an imaginary remote. Producers from Nickelodeon and Sesame saw SpeedMouse and ordered a pilot episode based on it, which became The Upside Down Show. The pilot was successful, and in 2005, Nickelodeon ordered a season of 13 episodes. The show was written and produced in New York, and it was filmed in Sydney, Australia. The cast and crew featured a mix of Australian and American talent. While creating the series, the writers intentionally included jokes for adults as well as children; Shane Dundas likened The Upside Down Show to making "an adult show for kids."

In 2010, the Umbilical Brothers announced that they had completed a script for a special-length episode titled The Upside Down Movie, 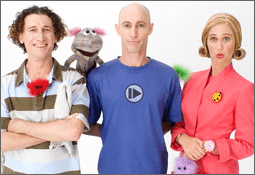 From left to right: David, the Schmuzzies (three are shown throughout the photo), Puppet, Shane, and Mrs. Foil.

David, Shane, the Schmuzzies, Mrs. Foil, and Puppet are featured in every episode. Some of the other characters (the Action Fingers, Fido, Spot, and Bob) are imaginary figures or objects personified by David and Shane.

Each episode begins with a cold opening showing one or both brothers in the middle of an activity. David introduces "the Remote" by pretending to hold a remote control. He explains that the Remote can control the action on-screen. He demonstrates by pressing various buttons, which control Shane's actions. The remote also has "wild card" buttons that cause strange or undesired effects. The main one is the "Upside Down" button, which causes the camera to shift to an upside down shot and can only be undone with the "Right Side Up" button. After explaining it, David offers the Remote to the viewer and gives it to them by reaching off-screen. The brothers ask the viewer to "press the Play button" to start the episode. This results in the viewer accidentally pressing the wrong button and putting the brothers in a bizarre situation.

The brothers encourage the viewer to press a button that will reverse the effect. The brothers commonly tell the viewers not to press the wrong button again, which results in a repeat of the same situation before the viewer is again encouraged to reverse the effect. Finally, the boys ask the viewer to press play, which starts the show's theme sequence. This sequence features the Action Fingers running and jumping over the show's title and credits. It ends with them running up to the apartment door, knocking on it, and opening it.

The episodes always begin in Shane and David's living room. Every episode features their sidekick Puppet and the Schmuzzies, who live with the brothers in their apartment. The central objective of each story is for Shane and David to get to a certain location. The brothers spend the episode searching for the location through the various doors, windows, and other places in their apartment. The brothers occasionally request help from the viewers, asking them to press buttons on their remote. Their journey takes them to three "Wrong Turn" rooms. The brothers' neighbor Mrs. Foil appears in the different rooms in various costumes, either helping them on their quest or unintentionally causing more trouble for them.

At one point on their journey, the brothers always encounter a child who teaches them something and sets them on the correct path. Eventually, they locate their destination "for the very first time" and visit the place in fast motion. The show ends with Shane and David back in their apartment. During the last few minutes of the show, they give the viewer an imaginary souvenir to thank them for their help throughout the episode.

Despite only having 13 episodes, the series has had a total of eight separate DVD releases. On January 19, 2012, Nickelodeon released all 13 episodes to DVD as a manufacture on demand Amazon exclusive. In Australia, the show's episodes were released across six DVD volumes, each containing 2-3 episodes. Each DVD disc was made to look like one of the Schmuzzies. In June 2009, the Umbilical Brothers temporarily sold an exclusive "Complete Series" DVD collection on their website, which combined the previous six volumes onto a two-disc DVD set. The collection was a limited edition, and it was discontinued after it went out of stock.

Since 2018, the Umbilical Brothers have uploaded the entire series to their public YouTube channel, making every episode available to view for free. In the descriptions of several uploads, David Collins included behind-the-scenes trivia about the episodes.

The series was added to Paramount+ (at the time CBS All Access) in January 2021.

The Upside Down Show received three awards, all in 2007. Because the series was written and produced in America and filmed in Australia, it was eligible for awards in both countries. The show's opening theme won the Creative Craft Daytime Emmy Award for Main Title Design. The series also received a Parents' Choice Award Silver Honor for Television. Nick Jr. Australia received a Logie Award for The Upside Down Show in the category Most Outstanding Children's Program.

All content from Kiddle encyclopedia articles (including the article images and facts) can be freely used under Attribution-ShareAlike license, unless stated otherwise. Cite this article:
The Upside Down Show Facts for Kids. Kiddle Encyclopedia.