The Wave, Coventry facts for kids

The Wave is an indoor water park situated in Coventry in the West Midlands, England. The water park currently holds the record for the largest wave pool in the UK, at a capacity of 20 million litres. The park also contains a lazy river, a splash zone and six slides of varying intensity. 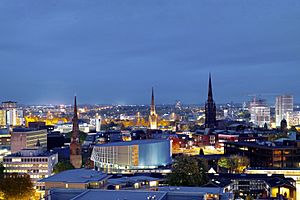 Coventry City Centre in 2018 showing The Wave under construction.

The water park at The Wave opened on 21 October 2019, while the gym and the spa opened in July 2019. The building cost £36.7 million to build. The Wave has won an award from the World Waterpark Association.

A total of six slides are in operation at The Wave:

All content from Kiddle encyclopedia articles (including the article images and facts) can be freely used under Attribution-ShareAlike license, unless stated otherwise. Cite this article:
The Wave, Coventry Facts for Kids. Kiddle Encyclopedia.