The Writing on the Hearth facts for kids

The Writing on the Hearth is a children's historical novel by Cynthia Harnett and illustrated by Gareth Floyd. It was first published in 1971 and was reissued in a special edition by Ewelme School in 2002. 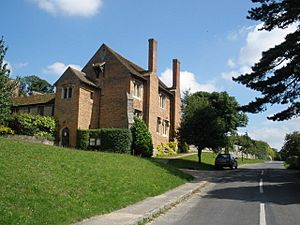 The events of the novel take place in the 15th century and primarily in the village of Ewelme in Oxfordshire, England. It is part of a tetralogy, or a four-part story, each of which is self-contained. The story features the village school, built by Alice Chaucer, granddaughter of Geoffrey Chaucer, and the adjoining village church. At the time of setting (1437) the school was newly built, one of the first brick-built buildings in the country. The buildings are still in use as a school, making it the oldest school building still in permanent use in the UK, possibly in the world.

Stephen, whose father was bodyguard to his Lord of Suffolk, is under taken into the Lord's household when his stepfather remarries and his sister enters a convent. Stephen is keen to learn and to enter the University at Oxford under the patronage of his Lordship's chaplain, but he becomes embroiled in some mild political intrigue when he believes he has let a copy of an indiscreet letter fall into the hands of his Lordship's enemies.

All content from Kiddle encyclopedia articles (including the article images and facts) can be freely used under Attribution-ShareAlike license, unless stated otherwise. Cite this article:
The Writing on the Hearth Facts for Kids. Kiddle Encyclopedia.