The Thomas A. Beach House is a historic home located in Fairbury, Illinois, United States. Built in 1872, it is a fine example of Italianate architecture, and has been compared with a landmark example of the style. The house was added to the U.S. National Register of Historic Places in 1983.

The Thomas A. Beach House is a two-story brick structure with a basement and central tower. It is a particularly fine example of Italianate architecture and has a number of elements that are hallmark of the style. Besides the central tower, its double bracketed eaves, large overhang at the gutter line, and its long slender windows all exemplify the Italianate style. The home's physical appearance is very similar to its original appearance, besides a garage added to the property's rear in 1951 there have been no major alterations since the original spate of construction. 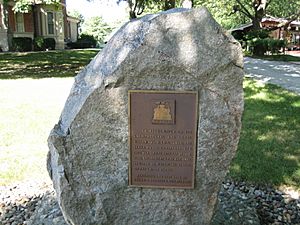 As a fine example of Italianate architecture the Beach House has drawn comparison with what is considered to be a landmark example of the style in the Morse-Libby House. Many of the elements displayed on the Beach House contribute to its fine architectural quality. The house also displays some significant construction techniques, such as its triple thick brick walls with airspaces between them to help provide insulation.

The Beach family was important socially and made a number of important political and economic contributions to the history of Fairbury giving the house local historic significance. Thomas Beach was a local banker and was active in municipal and school government. His granddaughter, Alma Lewis James, wrote several genealogical works and a history of Fairbury. The Thomas A. Beach House was added to the U.S. National Register of Historic Places on July 28, 1983 for its architectural importance as well as its importantance to Fairbury's history.

All content from Kiddle encyclopedia articles (including the article images and facts) can be freely used under Attribution-ShareAlike license, unless stated otherwise. Cite this article:
Thomas A. Beach House Facts for Kids. Kiddle Encyclopedia.