Fairbury is a city in Livingston County, Illinois, United States. The population was 3,968 at the 2000 census. 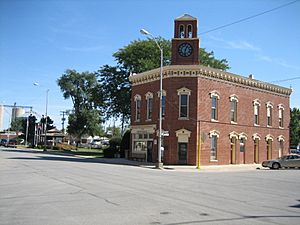 Fairbury City Hall is listed on the U.S. National Register of Historic Places.

Fairbury was laid out on November 10, 1857 by Caleb L. Patton and Octave Chanute. Like most Illinois towns of the 1850s, the original town of Fairbury was centered on a depot ground. It consisted of twenty-six blocks, each divided into fourteen to sixteen lots. There was no central public square, but one was later included in Marsh's addition. The plan used was virtually identical to that at Chatsworth Illinois, including the street names, and the plan very similar to that at Gridley and El Paso on the same railroad.

Octave Chanute was a civil engineer employed by the new Peoria and Oquawka Railroad, which is now the Toledo, Peoria and Western Railroad. Caleb L. Patton was an early settler on the land where the town was built. Chanute, a French native, was later famed for publishing Progress in Flying Machines, which helped pioneer aviation. The Wright brothers even mentioned Chanute as a mentor to them. Chanute built the railroad that made Fairbury possible, but did so against the will of Patton, Fairbury's first citizen.

It is Caleb Patton who should really be credited for the creation of Fairbury. It was he who owned the land that the original town was built on, and it was he who advertised lots for sale and attracted other people to live there. Today, the original town's area starts at the corner of Maple Street and First Street and stretches to the corner of Oak Street and Seventh Street. When Patton heard that Chanute wanted to build a railroad in his general direction, he saw it as an opportunity to make use of his otherwise deserted land and struck a deal. If Chanute built his railroad through Fairbury, then Patton would give Chanute half of the town's property. 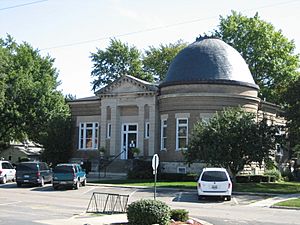 Patton and Chanute reached an agreement, and Chanute kept up his end of the deal. Patton gave a small chunk of the land to the Baptist Church and set aside an area for the railroad and a depot. However, when Chanute reached Fairbury, he was met by a group of armed citizens. The town had passed an ordinance that no railroad would pass through Fairbury, and they advised Chanute to simply build around the town (preferably where the golf course is currently). They had even received an injunction from Pontiac, Illinois forbidding Chanute from building a railroad through the town. Alma Lewis-James, author of Stuffed Clubs and Antimacassars: Account and Tales of Early Fairbury best describes what Chanute did next:

In 1859 John Marsh bought 80 acres (320,000 m2) of land to the west of Patton's. He donated a section of his property to the town, and it was named Marsh Park. He named another part of his addition to the town Livingston Square. It was to be used for businesses and markets. He built the Arcade Block in another section, which were a series of brick buildings connected to each other. Inside this block were two saddle and harness stores, a gun and sporting goods store, a poultry house, a drug store, Fairbury Marble Works (they made tomb stones for the cemetery), and a bed spring factory. Many more businesses were located here later on. In 1866, the Livingston Hotel was built. It was renowned for being the only hotel in Illinois with running water. 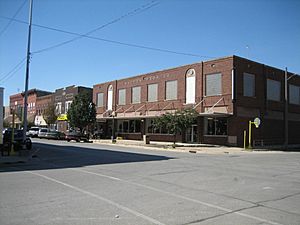 The Walton Brothers building in downtown Fairbury is still operating as a department store as of September 2007.

Patton sold his real estate in Fairbury years prior to this, and Wallace Amsbary was now the most prominent citizen in the east. When the railroad came to the west end of Fairbury, the tracks were laid. Marsh and his friends celebrated that Saturday evening. During the celebration, Amsbary and his friends built the railroad through the east side of Fairbury and then started it southbound towards Strawn. A train passed over the tracks the next day, and they stayed there. Amsbary celebrated his victory by building the Fairbury House, and advertised it as the "Poorest Hotel in Illinois."

After the fire caused by the train, three more subsequent fires succeeded in destroying many parts of the town. All of them were around the railroad, and together they destroyed more than twenty buildings and houses. Additionally, every few nights someone would try to start a fire in a residential area, and sometimes succeeded. Fairbury had somehow managed to become a prime location for pyromaniacs.

Whenever a fire would erupt, the town's fire bell rang. Currently, the bell can be found in front of the fire station on Locust Street. A fire was more of a festival than a tragedy because it seemed like whenever the bell rang, the whole town would show up to watch the fire. Fairbury wasn't necessarily large at the time, so finding the fires was not too difficult. Soon, Fairbury became known as the most flammable town in the Midwest. 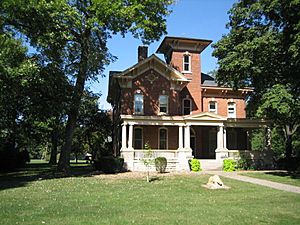 The Thomas A. Beach House is one of two Fairbury properties listed on the National Register of Historic Places.

The fire era of Fairbury came to an end after the Livingston Hotel burned. Marsh blamed Amsbary for the fire, and Amsbary blamed Marsh. Both of the men filed suits against each other for arson, and then for slander. Marsh was indicted, but was found not guilty. The power that the two men held in the town quickly died down, as did the feud between the east and west sides of Fairbury. The town ceased its civil quarrel, and agreed to work with each other instead of against each other. With that, Fairbury was to become just another small town along the Toledo, Peoria, and Western Railroad.

It was in this very town that a resident and restaurant owner named Ronald McDonald was in a 26-year legal battle with McDonald's over the name of his restaurant. He ultimately prevailed and continued using his name on his restaurant despite objections by the franchise. 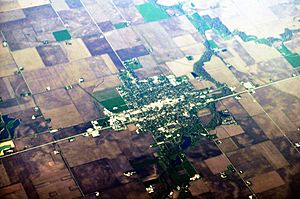 There were 1,544 households out of which 34.3% had children under the age of 18 living with them, 56.5% were married couples living together, 8.4% had a female householder with no husband present, and 31.8% were non-families. 28.2% of all households were made up of individuals and 15.2% had someone living alone who was 65 years of age or older. The average household size was 2.48 and the average family size was 3.05.

All content from Kiddle encyclopedia articles (including the article images and facts) can be freely used under Attribution-ShareAlike license, unless stated otherwise. Cite this article:
Fairbury, Illinois Facts for Kids. Kiddle Encyclopedia.