Forrest is a village in Livingston County, Illinois, United States. The population was 1,225 at the 2000 census. 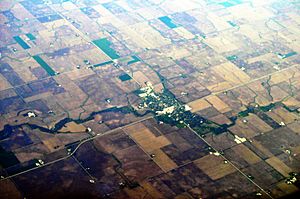 Forrest was laid out on 11 December 1866 by Israel J. Krack (16 November 1816 – 6 June 1900). Krack was born in Baltimore, Maryland. Both of his parents had come from Germany. He was briefly a teacher, lived in Indiana, and came to Livingston County in 1854. Krack was a farmer, notary public, grain dealer, and in later life an insurance agent. Krack was elected Illinois General Assembly in 1872 and became treasurer of Livingston County in 1878. Krack Street, which parallels the railroad, was named for the town’s founder. When Forrest was established the Toledo Peoria and Western Railroad had already been in operation for almost ten years and therefore, the origin of the town is unlike Fairbury, Chatsworth, Chenoa, Gridley and El Paso, all of which were founded when the railroad was first built. Within a few years of is founding, the people of Forrest did not know the full name of the person for whom the town was named. The author of the 1878 History of Livingston County says only two things about Mr. Forrest: he was a business partner of C. L. Frost, an official of the Toledo, Peoria and Western, and that he had promised to do something for the young village and that promise was “unfulfilled.” The first version of the name was said to be Forestville, spelled with one ‘r,” but Forrest quickly came into use. The Forrest Township was created soon after the village was founded and took its name from the village.

In 1861 or 1862, before the town was platted. Israel J. Krack was operation a grain elevator at the location. Like most towns of the period, the plan of the Original Town of Forrest was centered on a long narrow Depot Grounds, which were on the north side of the tracks. The Plat was a simple Grid of twenty blocks. The first house in Forrest was built by Mr. Krack, who was also the first postmaster and the first station agent. He also laid out many additions to the town. The first Hotel was built by William Umberfield and known as the Forrest House and the first mill was built by R. B. Wilson. The first church was built by the Methodists in 1868. .The town grew rapidly and by 1870 had over 1,000 people. Forrest, like almost every other early town of Central Illinois during this period was built from inexpensive pine lumber brought in by the railroad from Michigan or Wisconsin. In the winter of 1868-1869 much of the business district, including one grain warehouse was burned. It was quickly rebuilt. This was the first on many fires that plagued the new town. In 1890 a particularly devastating blaze destroyed much of down Forrest. Rebuilding was rapid and by 1893 there were five hotels.

Introduction of the Wabash Railroad

The people of Forrest worked to attract a second railroad. At first there were hopes that the Chicago and Paducah Railroad could be induced to construct its tracks through the town, but this road was diverted to nearby Fairbury. Success came when the Wabash Railroad, which was constructed through Forrest in 1880. On 1 May 1880 the first train on the Wabash passed through Forrest. Forrest became an important stopping place on the line of the Wabash linking Chicago and Kansas City. Soon repair shops were built and by the early 1890s over sixty men were employed here. The town became freight shipment point for the Chicago Division of the railroad. In 1894 local workers supported a strike against the Wabash and many of those who had supported the strike lost their jobs to strikebreakers. The Freight division was removed to Decatur. Between 1914 and 1921 it was briefly returned to Forrest. By the 1920s the days of Forrest as a railroad center began to fade. In 1924 the state of Illinois began construction on a paved road that eventually became Route 24. 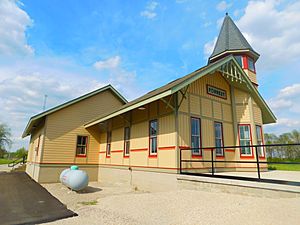 There were 469 households out of which 33.0% had children under the age of 18 living with them, 53.9% were married couples living together, 3.4% had a female householder with children & no husband present, and 32.8% were non-families. 27.7% of all households were made up of individuals and 28.6% had someone who was 65 years of age or older.

There were 470 households out of which 34.3% had children under the age of 18 living with them, 61.7% were married couples living together, 8.1% had a female householder with no husband present, and 26.8% were non-families. 24.7% of all households were made up of individuals and 12.8% had someone living alone who was 65 years of age or older. The average household size was 2.61 and the average family size was 3.13.

All content from Kiddle encyclopedia articles (including the article images and facts) can be freely used under Attribution-ShareAlike license, unless stated otherwise. Cite this article:
Forrest, Illinois Facts for Kids. Kiddle Encyclopedia.