Dwight is a village located mainly in Livingston County, Illinois, with a small portion in Grundy County. The population was 4,032 at the 2020 census. Dwight contains an original stretch of U.S. Route 66, and from 1892 until 2016 continuously used a railroad station designed in 1891 by Henry Ives Cobb. Interstate 55 bypasses the village to the north and west.

Dwight is mostly located in Livingston County, but a small portion extends northward into Grundy County to include the commercial area near the northern I-55 interstate exit.

Dwight was laid out on 30 January 1854 by Richard Price Morgan, Jr. (17 September 1828- 20 May 1910), James C. Spencer (29 July 1828 – after 1990), and John Lathrop (6 March 1909 – May 1870), each of these three men took a quarter of the land. All were working as engineers for the railroad. The final quarter jointly owned by two Bloomington brothers, Jesse W. Fell (10 November 1808 – 25 February 1878) and Kersey H. Fell (1 May 1815 – 1 May 1893) The five were a distinguished group of men and all had links to the Chicago and Mississippi Railroad. Spencer was born in the Hudson River valley south of Albany; his ancestors included a United States Supreme Court Chief Justice and two governors of New York; he was later to have an important career in Wisconsin railroads. Lathrop was a civil engineer with a long history of working with canals and railroads in New York; he would soon return to Buffalo. Morgan was the son of a noted civil engineer and he later became nationally known for his work on electric railroads in New York. The Fell brothers were well-connected Bloomington land developers who had been active in helping found many central Illinois towns including Clinton, Normal, Pontiac, and Towanda. They were employed by the railroad as land agents; the Fells are perhaps best known today for their role in persuading Abraham Lincoln to write his autobiography. The plan of the founders was to purchase a block of land along the route of the railroad and to divide it into four equal parts. Morgan would then take charge of the operation. He would draw up a plat of the new town, sell the lots, and divide the proceeds among the others. The station was to be placed at the point where the four quarters met. Any unsold lots would be divided among the partners. The other men seemed to believe that Morgan was acting in the interest of the railroad. The town was named for Henry Dwight, who had funded most of the building of this part of the railroad. The Chicago and Mississippi soon became the Chicago and Alton Railroad. Attempts in 1858 to rename it Jersey, Beckman, or Dogtown failed.

Unfortunately for the partners, their plan did not go quite as expected. When the surveyors, working for the railroad’s chief engineer, Oliver H. Lee, reached the proposed location of the town in 1853 the speculators found that the tracks would pass slightly east of the planned central point and would go through lands in Morgan’s part of the land. This would have made Morgan's lots more valuable than the others. The men reconsidered their plan. In the revised version, everyone would convey their lots to Morgan, who would then sell the lots, and split the total profits. This was done. In 1855 the partnership was dissolved and all unsold lots were divided among the five men. To announce to the public that a town would be located here, a tin pan was placed on top of a telegraph pole. Railroad workers flooded into the townsite. Morgan became afraid that they would cover valuable lots with “Irish shanties” and make the lots unsellable. Therefore, he had John Campbell erect a boarding house. This was the first building in Dwight. The first house in town was built by Augustus West in June 1854. The first passenger train reached Dwight on 4 July 1854 and regular traffic on the railroad began in August of that year. The first store was a two story building put up by David McWilliams in 1855 and painted white to attract customers. The first item sold was a pattern for a “lawn dress” that one of the workmen purchased for the wife of the station master. In 1857 John Spencer began buying grain and erected a grain warehouse. A grain elevator soon followed and a large stone mill was built in 1859.

Like most new towns founded in Illinois in the 1850s, Dwight was designed without a town square. It was centered instead on a depot ground. This was a widened area of railroad property, about 1,000 feet long and 200 feet wide, where the tracks passed through the town. Such depot grounds were common in towns of the 1850s and may still be found at Gridley, Chatsworth, Odell, Towanda, McLean and many other central Illinois places. By the 1870s depot grounds had begun to fall out of favor. Unfortunately, while Morgan had deeded the central 100 foot band to the Chicago and Mississippi, he never got around to turning over the remainder of the depot grounds to the railroad. This led to a tangled lawsuit, which eventually had to be settled by the United States Supreme Court. The suit provides excellent information on the early history of Dwight. Dwight's Original Town was quite large, consisting of twenty-four blocks each of which contained twenty-eight lots. Unlike Odell, where the entire Original Town was aligned with the railroad, only the small central part of the Original Town of Dwight paralled the tracks, with West street running diagonally on the northwest side of the railroad and East street on the south side. In the remainder Original Town, streets ran true north-south or east-west. This created two odd triangles of land where these streets met the diagonal streets at the center of town. The southeastern triangle became the site of Dwight’s waterworks. The early depot was on the northwest side of the tracks.

The Prince Comes to Town

The best remembered event in the early history of Dwight was the time England's Prince Albert, the Prince of Wales, son of Queen Victoria and heir to the British throne came to stay for a few days in the town. (At that time, the town was known as Dwight's Station.) The prince was supposedly traveling incognito as Lord Renfrew, using one of his lesser titles, but this fooled no one. The visit was important enough that local people recorded the exact time the prince arrived: twenty-seven minutes after six on the afternoon on Saturday 22 September 1860. He was to stay with Charles C. Spencer, one of Dwight's founders, at Spencer's farm south of town. Local couches and chairs were deemed insufficient for His Royal Highness, so Spencer's furniture was stored, and the prince's own furniture, which had been shipped ahead, was placed in the house. Soon after the Crown Prince arrived the shooting began; the first bird shot by the royal visitor was a little screech owl, which can not have provided much in the way or either sport or food. In the following days the hunting improved. The royal party eventually killed over 200 prairie chickens and quail. Prince Albert attended Sunday services at the local Presbyterian Church. On Wednesday, 26 September, he departed but not before planting an elm on Spencer's farm. Prince Albert went on to become King Edward VII and the people of Dwight have never tired of talking about the visit. In 1878 the grounds of the house where the prince stayed were improved by the famed American landscape architect Ossian Cole Simonds and in the present century were given to the town and have become Renfrew Park. 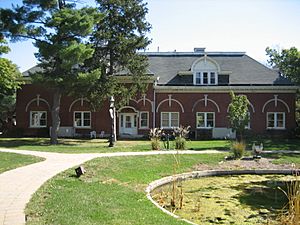 In 1869 the prospects of Dwight were improved when a second railroad was constructed linking Dwight with Streator, Illinois. In the same year the Chicago and Alton Railroad was double tracked from Odell to Gardner. The first brick house in Dwight was built in 1872. H By 1891 it became clear that the growing town needed a new railroad station and the railroad hired Henry Ives Cobb to design the building. The result was a splendid Richardson Romanesque building, which in 1982, was added to the National Register of Historic Places as the Dwight Railroad Station. Another new downtown building now on the National Register was Frank L. Smith Bank opened in 1906, which was designed by Frank Lloyd Wright. In 1879 Dwight physician, Dr. Leslie Keeley, working with Richard Oughton, announced that he had found a cure for alcoholism based on gold chloride. The Keeley Institute soon became world-famous treating hundreds of thousands of patients including Elliott Roosevelt, the brother of President Theodore Roosevelt. The John R. Oughton House, on the south side of Dwight, was added to the National Register of Historic Places in 1980. In 1930 the state of Illinois established the Oakdale Reformatory for Women in Dwight, which has since become the Dwight Correctional Center. In 1921 paving was finished on the Chicago to Springfield road, which in 1926 was designated as Route 66. In 1964 the first phase of Interstate 55 was completed and Dwight became an increasingly a highway oriented town.

On June 5, 2010, an EF-3 tornado ripped through Streator and later Dwight. As described by one AP reporter who covered the disaster, the tornado "literally rearranged these towns of Dwight and Streator, with the worst damage in mobile home parks and downtown Streator. The residents of Dwight are thankful for the fact that the tornado largely spared their town." The rebulilding (and cleanup) effort continues as of July 22, 2010. 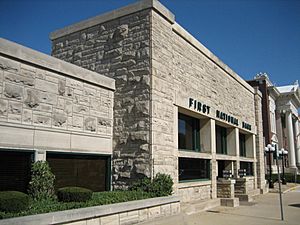 Dwight is home to one of only three banks designed by the famous architect Frank Lloyd Wright, the First National Bank of Dwight, as well as an historic U.S. Route 66 Texaco gas station, Ambler's Texaco Gas Station, and a 1891 railway station. Two of the buildings, the gas station and the train station, are listed on the National Register of Historic Places. See also John R. Oughton House. The 1857 Dwight Pioneer Gothic Church is a rare example of wooden Carpenter Gothic church building.

All content from Kiddle encyclopedia articles (including the article images and facts) can be freely used under Attribution-ShareAlike license, unless stated otherwise. Cite this article:
Dwight, Illinois Facts for Kids. Kiddle Encyclopedia.