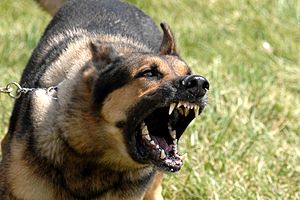 A threat display is anything that an animal does to scare away other animals. A dog will bare its teeth and growl. A cat will hiss. A snake will coil up, raise its head, and move back and forth to point itself at any big animal that approaches it. 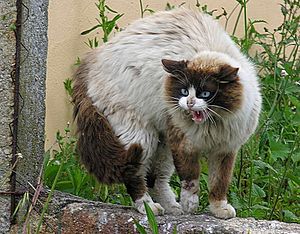 Many animals have threat displays that make them look bigger. A lion's mane will stand up, making it look much larger and more powerful. Humans may raise both hands, spread wide, above their heads. Bears will stand on their hind legs, raise their front legs, and show their teeth while growling.

All content from Kiddle encyclopedia articles (including the article images and facts) can be freely used under Attribution-ShareAlike license, unless stated otherwise. Cite this article:
Threat display Facts for Kids. Kiddle Encyclopedia.