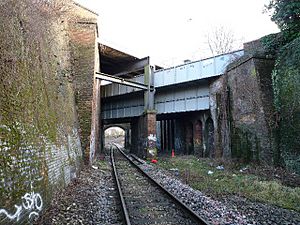 Three Bridges is a scheduled monument near Hanwell in west London, United Kingdom, designed by Isambard Kingdom Brunel. Work began in 1856, and was completed in 1859.

The three bridges are a clever arrangement allowing the routes of the Grand Junction Canal, Great Western and Brentford Railway, and Windmill Lane to cross each other - road above canal above railway.

The project was Brunel's last before he died on 15 September 1859, just two months after its completion.

All content from Kiddle encyclopedia articles (including the article images and facts) can be freely used under Attribution-ShareAlike license, unless stated otherwise. Cite this article:
Three Bridges, London Facts for Kids. Kiddle Encyclopedia.