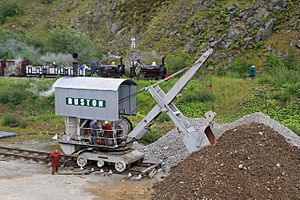 The Threlkeld Quarry and Mining Museum is located in Threlkeld three miles (4.8 km) east of Keswick, in the heart of the Lake District in Cumbria. It is suited for families, school classes and enthusiasts. It includes a quarry with a unique collection of historic machinery, such as locomotives and cranes, an underground tour of a realistic mine, a comprehensive geological and mining museum and mineral panning. 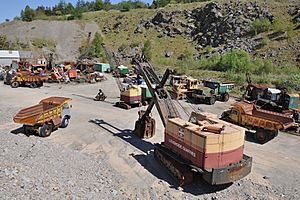 Threlkeld Quarry originally opened in 1870 to supply railway ballast to the Penrith-Keswick line. Later, the stone was used by the Manchester Corporation Water Works for their Thirlmere scheme, for railway ballast for the Crewe-Carlisle line, for roadstone, kerbing and for facing buildings with dressed stone. The granite quarry finally closed in 1982 and is now the site for the Threlkeld Quarry & Mining Museum which is run by a group of staff and volunteers.

The extensive quarry site has ample space for the display of the unique collection of vintage excavators and old quarry machinery. 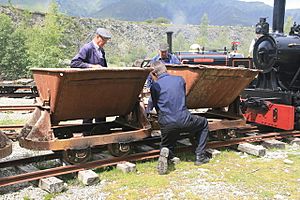 The track of the 2 ft (610 mm) gauge quarry railway has been relaid and provides a ride into the inner quarry for visitors to view the quarry faces in safety. Several locomotives are in regular use and others are on display in the Top Shed.

The steam locomotive 'Sir Tom' was built by W.G. Bagnall of Stafford in 1926 and named after Sir Tom Callender of British Insulated Callender's Cables (BICC). This 0-4-0 saddle tank narrow gauge locomotive worked at BICC in Kent until 1968. After being idle for thirty three years, it arrived at Threlkeld in 2001, and since then has been completely overhauled. Sir Tom was rebuilt and is driven by Ian Hartland. The locomotive completed the first full season of work at Threlkeld Quarry and Mining Museum in 2010. Sir Tom is mainly used to haul passenger trains from the middle quarry into the inner quarry. 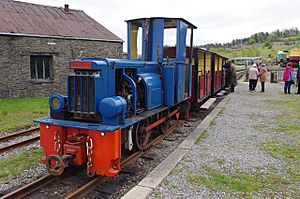 The 0-4-0 Hunslet diesel locomotive with 50 hp was built in 1945 and used by the National Coal Board in the South Yorkshire area. It was retrieved from the underground prior to a colliery closing. I has been modified at the Threlkeld Quarry and Mining Museum to make it more suitable for passenger trains and is regularly used.

The Ruston 48 DL diesel locomotive from 1947 was used by the Royal Navy Armaments Depot in Broughton Nook, near Cockermouth. It was acquired, when the depot closed in 1994, and was regauged from 2 ft 6 in (760 mm) to 2 ft (610 mm) and fitted with air braking so it can operate passenger trains and it is in regular use.

The museum now has a new underground mine which has been developed with the help and collaboration with the Cumbria Amenity Trust Mining History Society and some volunteers. A guided tour through a reconstructed lead and copper mine is one of the highlights of the museum (dependent on weather and staff availability. To be confirmed by phone). Mineral panning is optionally available.

The museum has been in operation for more than ten years, and the site continues to expand through the dedication of the staff and volunteers. The museum is open 7 days a week from Easter to October.

The Mining Room exhibits artefacts, plans and photographs of explorations of many mines in the Lake District, which exploited ores of copper, iron, lead, zinc, tungsten, graphite, barites and fluorite. A representative display of local minerals can be seen, and there is a section on lighting, drilling and explosives.

The Quarry Room explains the relationship between the geology of the Lake District and the quarrying of local limestone, sandstone, granite and slate. Samples of rocks from all the important local formations are fixed to a large table map. Photographs and rock samples from more than fifty old and more recent quarries are displayed to illustrate the special features of each.

All content from Kiddle encyclopedia articles (including the article images and facts) can be freely used under Attribution-ShareAlike license, unless stated otherwise. Cite this article:
Threlkeld Quarry and Mining Museum Facts for Kids. Kiddle Encyclopedia.