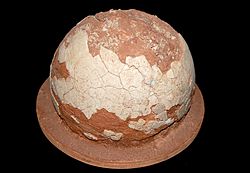 Titanosaurus was a genus of sauropod dinosaur, first described by Lydekker in 1877 from fragments, but not confirmed by later research.

Titanosaurus was 9-12 metres (30-40 ft) long and weighed about 13 tons. Titanosaurus has traditionally been treated as a "wastebasket taxon" for poorly preserved sauropod remains. The most well-known species of Titanosaurus, "Titanosaurus" colberti, has been renamed Isisaurus. The remains were from the Upper Cretaceous of India.

All content from Kiddle encyclopedia articles (including the article images and facts) can be freely used under Attribution-ShareAlike license, unless stated otherwise. Cite this article:
Titanosaurus Facts for Kids. Kiddle Encyclopedia.