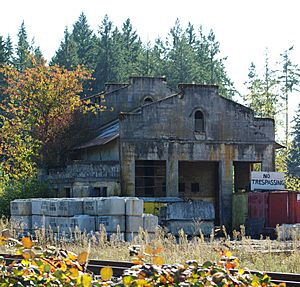 Tonquin was a station on the Oregon Electric Railway, named for the Pacific Fur Company ship Tonquin, because of the company's policy of naming stations for topics of historic interest to Oregonians. The station was built in 1907-08. Tonquin post office was established in 1912, and closed in 1933.

The station was 12 miles from Multnomah and 12 miles from Donald, on what is now the main line of the Portland and Western Railroad. Tonquin is on the portion of the line used by the Westside Express Service passenger train. The abandoned Oregon Electric substation/depot still exists at the site today.

All content from Kiddle encyclopedia articles (including the article images and facts) can be freely used under Attribution-ShareAlike license, unless stated otherwise. Cite this article:
Tonquin, Oregon Facts for Kids. Kiddle Encyclopedia.