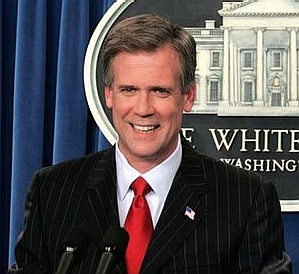 Robert Anthony Snow, better known as Tony Snow (June 1, 1955 - July 12, 2008), was an American journalist, television personality, commentator and radio host who made contributions for Fox News very regularly beginning in 1996. He was born in Berea, Kentucky and raised in Cincinnati, Ohio. He was host of Fox News Sunday, before working for President Bush the second, but he briefly performed switched to CNN during 2008. However, he was merely an analyst at CNN, not a journalist. He was strongly associated with George W. Bush (when he was the President). Before Fox News, Snow was often a guest for The Rush Limbaugh Show. Snow died from colon cancer in Georgetown, Washington, D.C.

All content from Kiddle encyclopedia articles (including the article images and facts) can be freely used under Attribution-ShareAlike license, unless stated otherwise. Cite this article:
Tony Snow Facts for Kids. Kiddle Encyclopedia.