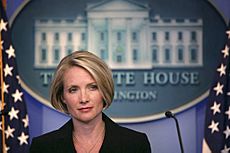 Dana Marie Perino (born May 9, 1972) is an American journalist. She was the White House Press Secretary under President George W. Bush, from September 2007 to January 2009. She is currently a political commentator working for Fox News. She works for the program The Five.

Perino was born in Evanston, Wyoming. She was raised in Denver, Colorado.

All content from Kiddle encyclopedia articles (including the article images and facts) can be freely used under Attribution-ShareAlike license, unless stated otherwise. Cite this article:
Dana Perino Facts for Kids. Kiddle Encyclopedia.