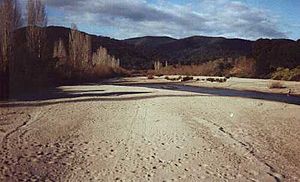 Towamba is a small community, in New South Wales, Australia in Bega Valley Shire. It is located about forty minutes' drive west of Eden. At the 2006 census, Towamba had a population of 367 people.

Along with settlements such as Burragate, Pericoe, Rocky Hall and Kiah, Towamba was one of the settlements established after Benjamin Boyd began to open up the area to European settlement in the 1840s and 1850s. 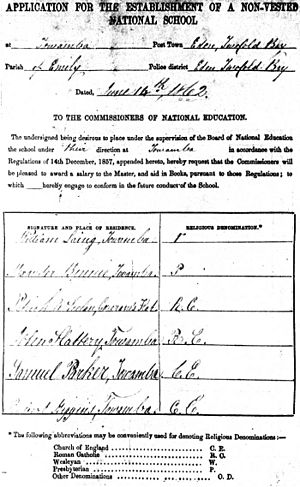 In 1889, following a cricket match at Millpoint Pass, when Towamba defeated nearby Pericoe, members of the losing team returned with guns to set about killing the victors. A reliable account of what occurred is unavailable, a painting by William Laing at the Eden Killer Whale Museum provides, at least, a record of this (supposed) bizarre event.

All content from Kiddle encyclopedia articles (including the article images and facts) can be freely used under Attribution-ShareAlike license, unless stated otherwise. Cite this article:
Towamba, New South Wales Facts for Kids. Kiddle Encyclopedia.