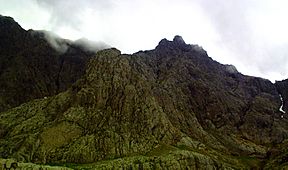 Tower Ridge (Ben Nevis, Highland Scotland) showing the Little and Great towers high on the crest. The inverted N of chimneys on the West Face of Douglas Boulder can be climbed at grades ranging from Difficult to Severe.

Tower Ridge is one of several ridges protruding north east from the summit plateau of Ben Nevis, the highest mountain in the United Kingdom.

The ridge starts close to the Charles Inglis Clark hut below Coire Leis and terminates close to the highest point of the mountain. The normal route up Tower Ridge is a graded 3S as a scramble (the highest scrambling grade), and contains short pitches of rock climbing graded as difficult. It is one of the few mountain routes in Scotland with sufficient length and exposure to be considered Alpine in character.

In winter it is graded Scottish Grade IV, partly because most of its difficulties (in particular the Eastern Traverse and the Tower Gap), lie high up on the route.

A number of distinct features can be identified on the ridge. In ascending order, these are (page references are to the SMC's 2002 Climbers' Guide, edited by Simon Richardson): 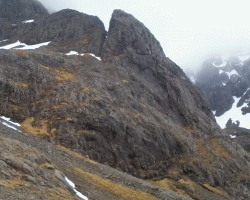 Most parties bypass the Douglas Boulder (centre) to join Tower Ridge from East Gully (left) up to the Douglas Gap; it is easier still to scramble onto the ridge by a right-rising traverse from the left end of the large, high snowpatch. 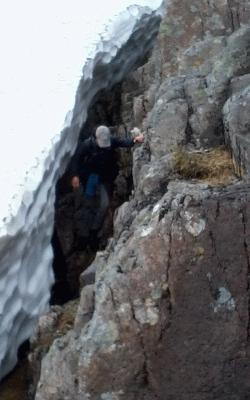 Even as late as June, snow can block access to the foot of East Gully on the Douglas Boulder, in which case the eastern flank of the boulder can be scrambled.

Tower Ridge was first climbed in descent by J., E. and B. Hopkins on 3 September 1892. They had ascended it as far as the Great Tower the previous day. The first ascent and first winter ascent was Norman Collie, Godfrey Solly and J.Collier on 29 March 1894. They turned the Great Tower on the right by the Western Traverse, which is harder than the Eastern Traverse; the route normally used today.

All content from Kiddle encyclopedia articles (including the article images and facts) can be freely used under Attribution-ShareAlike license, unless stated otherwise. Cite this article:
Tower Ridge Facts for Kids. Kiddle Encyclopedia.