Town Center is one of the ten villages in Columbia, Maryland, United States, first occupied in 1974. It is a non-contiguous, diverse area, and the most urban-like, ranging from multi-level high density apartments homes and office buildings, to single family homes.

The town center is constructed on the grounds of Oakland Manor, a former slave plantation. Construction started in 1966, with sidewalks linking major amenities added in 1984.

Columbia Exhibit Center is the facility built to market the project to visitors. The building was designed by the firm of Gehry, Walsh and O'Malley. The site hosted 215,000 in its first year.

Vantage Point is in the tract patented by John Dorsey as Dorsey's Adventure in 1688. The name comes from a poem by Robert Frost, and the street names are from Frost and William Cullen Bryant. It contains a house, Historic Oakland, built in 1811 by Charles Sterrett Ridgely. The Town Center village offices are in Historic Oakland. Oliver's Carriage House, a stable built by Robert Oliver, is on the grounds and is currently home to Kittamaqundi Community, a non-denominational religious congregation.

Amesbury Hill was originally set aside as an estate area for Rouse Company executives and was part of the Mercer Tract. Mercer Tract was owned by the parents of Lucy Mercer, the personal secretary to Franklin Delano Roosevelt. Creighton's Run, developed in 1979, was named for the boss of the construction company.

Banneker was first occupied in 1992, named for Banneker Road. The road was named for Benjamin Banneker.

Vantage House is a 13-story Life Care Retirement Community built in place of an 18th-century historical residence and opened in October 1990. 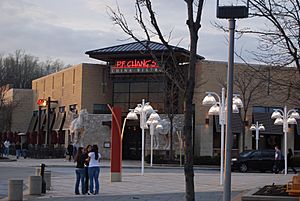 The Mall in Columbia

The Mall in Columbia, a large shopping and entertainment mall, is located within Town Center.

The Central Library of Howard County opened in 1981, and is located at the intersection of Little Patuxent Parkway and South Entrance Road.

Columbia Town Center is a major hub for the Regional Transportation Agency of Central Maryland bus service. The central station is located at the Columbia Mall, directly west of the Main Entrance, Restaurant Row, and Sears. MTA and Metrobus provide service to this location as well.

In 2016, Howard County launched its first bike share pilot program for Columbia. The bike share will span across the Town Center from Howard County General Hospital at Cedar Lane to Blandair Park in Oakland Mills Village.

All content from Kiddle encyclopedia articles (including the article images and facts) can be freely used under Attribution-ShareAlike license, unless stated otherwise. Cite this article:
Town Center, Columbia, Maryland Facts for Kids. Kiddle Encyclopedia.