The toyger is a breed of domestic cat, the result of breeding domestic shorthaired tabbies (beginning in the 1980s) to make them resemble a "toy tiger", as its striped coat is reminiscent of the tiger's. The breed's creator, Judy Sugden, has stated that the breed was developed in order to inspire people to care about the conservation of tigers in the wild. It was recognized for "registration only" by The International Cat Association in the early 2000s, and advanced through all requirements to be accepted as a full championship breed in 2012. There are about 20 breeders in the United States and another 15 or so in the rest of the world, as of 2012[update]

In 2020, 469 toygers are registered on the Pawpeds Database.

The breed began development in the 1980s in the U.S. when Judy Sugden, a breeder looking to find the difference between the mackerel markings in tabbies, noticed distinctive markings in one of her cats. These tiny spots occurring on the temples of the face (an area normally devoid of distinct pattern) proved genetically that the circular tiger face pattern could be possible in a domestic cat. After importing a tom from the streets of India with noticeable spotting breaking up the usual tabby lines on the top of the head, the quest to develop a toy-tiger began in earnest. About forty domestic cats from various countries were selected over several years as foundation stock, including Bengals, unpedigreed domestic short-haired cats with stripes, and at least one cat imported from India for its ear markings; each provided a specific desired trait or reinforcing ones already chosen (especially the striped appearance).

It has been said that all glitter in the Bengal cat, Egyptian Mau and Toyger breeds originates from cat that Jean Mill found in India: Millwood Tory of Delhi. 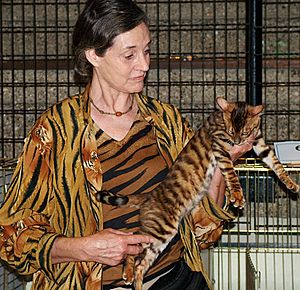 In 1993, TICA accepted the Toyger for Registration and in 2000 advanced them to new breed exhibition classes, finally granting them full recognition as a championship cat in February 2007.

In 2020, TICA recognizied Toyger Club as a TICA chartered Club.

The following is adapted from the 2008 TICA breed standard for the Toyger:

All content from Kiddle encyclopedia articles (including the article images and facts) can be freely used under Attribution-ShareAlike license, unless stated otherwise. Cite this article:
Toyger Facts for Kids. Kiddle Encyclopedia.