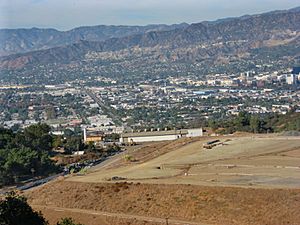 Toyon Canyon from above.

The Toyon Canyon Landfill was a controversial landfill wholly within Los Angeles' Griffith Park. Filling began in 1957 and ended in 1985. A lawsuit in 1959 attempted to stop the project but was unsuccessful. A summary of the lawsuit is available here. There was a move in the 1980s to expand the landfill into Royce's Canyon, but that was defeated.

Landfill gas is collected from the decomposing waste and used for power generation. The landfill is managed by the Los Angeles Bureau of Sanitation which plans to have "low intensity open meadow area intended for passive recreational activities". The landfill was 'closed' (to the specifications of the regulatory agencies) as of December 31, 2008. The landfill will be maintained and monitored in accordance with SCAQMD 1150.1, provisions of AB 32, and other regulations for at least 30 years. The landfill is being landscaped with native plants (such as: Toyon, Oak, California poppy, Lupine, among others), while non-natives (such as mustard and tumbleweed) are being actively removed.

During the May 2007 fire in Griffith Park, the helispot was used to help fight the fire. At times there were two choppers on the pad and one waiting to tank up.

Like much of Los Angeles and Southern California, Griffith Park has been used in countless movies and television shows. Toyon Canyon, the adjoining section Mt. Hollywood Drive, and associated areas have appeared in the following (among others):

All content from Kiddle encyclopedia articles (including the article images and facts) can be freely used under Attribution-ShareAlike license, unless stated otherwise. Cite this article:
Toyon Canyon Landfill Facts for Kids. Kiddle Encyclopedia.