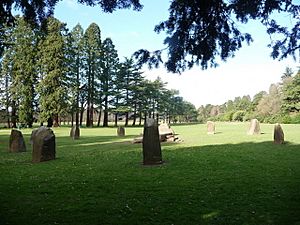 Tredegar Park (Welsh: Parc Tredegar) is a 90-acre (36 ha) public park situated in the western Coedkernew area of the city of Newport, South Wales. It lies close to junction 28 of the M4 motorway connecting London and West Wales.

It formerly formed part of the original 16th century estate of the Morgan family, first substantially redeveloped by William Morgan (of Machen and Tredegar) in the 17th century and owned for generations by the Lords Tredegar. The Grade II building, Tredegar House, and the Grade I listed stables, are also situated within the park.

The park is very large, comprising around 90 acres (36 ha) and includes a large lake that it is possible to walk around.

The present day community (parish) and electoral district (ward) of Tredegar Park is a much smaller area consisting of the Duffryn estate and immediate surroundings.

Parkrun (a UK-wide running series) takes place in the grounds of the park each Saturday at 9am. The first event was hosted in 2011. As of 2019, 435 runs have been held, attracting 14,963 runners from 703 clubs. An average of over 300 people compete each week, however some events have attracted up to 700 competitors.

The National Trust took over management of the Country House and Grounds in 2015. As a condition of their management, the grounds and gardens of the house are to remain free for the public to access, with the House entry at £10.10 for adults as part of the Trust's costs to manage their estates.

All content from Kiddle encyclopedia articles (including the article images and facts) can be freely used under Attribution-ShareAlike license, unless stated otherwise. Cite this article:
Tredegar House Country Park Facts for Kids. Kiddle Encyclopedia.